Make a ligature by deleting part of a letter

I'd like to display a ligature of an A and an L where the A is followed by the bottom 'bar' of the L to form a ligature. Essentially, it would be like the following, without the vertical bar of the L.

You could use \clipbox from the trimclip package (which is part of adjustbox) to cut off the stem of the leter L. Its syntax is

and it cuts off <l> from the left, <b> from the bottom, <r> from the right and <t> from the top of <stuff>. The part that is clipped off is not covered, but actually hidden.

It's not a perfect solution though, as the kerning between the L and the next character will be incorrect if that character is wider at the top than at the bottom, as illustrated below. If you want to avoid this you'll probably have to look ahead for the next character or something (or maybe something with Lua is possible?).

I'm using \DeclareRobustCommand instead of \newcommand for technical reasons (see here). Without it you would not be able to use this command in e.g. section titles or index entries.

I would prefer defining \AL/ instead of \AL. You could do this using

The advantage is that spaces after \AL/ aren't eaten like those after \AL are, so you can write something like Minim\AL/ \AL/uminium without having to insert an explicit \ between the words or having to add a space between \AL/ and uminium. You'll get an error if you forget the closing /. I don't know who came up with this idea, but it can be found e.g. here and here.

I'm using \protected for the same reason as I was using \DeclareRobustCommand above.

Just because we can, here's a version that does look ahead at the next character and removes an appropriate amount of space. It only works if the token following \AL/ is an actual letter (and not e.g. a macro that expands to one or produces an accent). 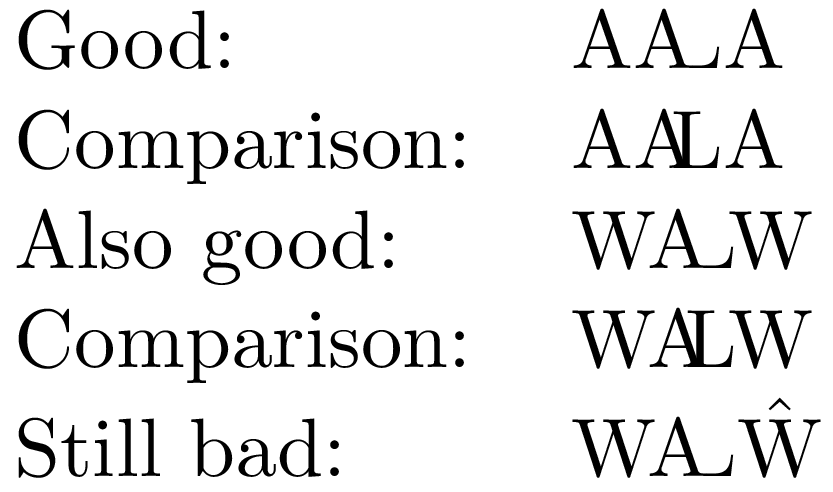 Not the answer you're looking for? Browse other questions tagged ligatures or ask your own question.

460
Space after LaTeX commands
284
What is the difference between Fragile and Robust commands?
38
No space following macro without argument