Add "This version" and "First version" in abstract

I am trying to add on separate lines "This version" and "First version". I have tried the following code, but it does not seem to work:

Any help will be greatly appreciated.

At first you need to define two commands in the preamble \thisdraft and \firstdraft which you are supposed to use later in your document. These commands includes the words of your choice (in your case "This draft: December 2018" and "First draft: March 2015"). Then place the commands as an arguments in the date{} commands of the article so that you ensure the commands output will be printed in the place designated for the date{} in the article title. The code will be as follows:

The output will be: 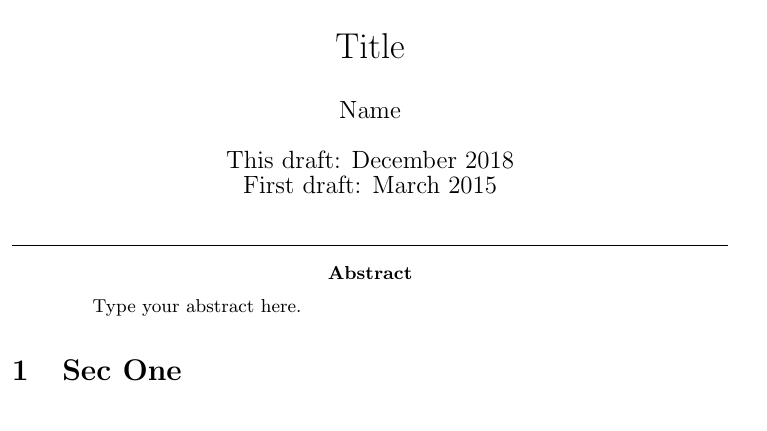 You can later change the arguments of the commands \thisdraft and \firstdraft according to your needs.

Why redefine such important commands? The commands \today and \newline that you are trying to re-define are mainly used in latex in many classes and packages definitions. Re-defining them may cause unnecessary issues.

and then use them in the text as \mytoday{} and \mynewline{}.

Not the answer you're looking for? Browse other questions tagged abstract or ask your own question.