Package fontspec Error: The font cannot be found on win10

I have installed the Adobe Garamond Pro.otf fonts on my computer running win10, as shown in the following picture.

However, when I run xelatex, the otf fonts cannot be found.

If that doesn’t work, \setmainfont{[Adobe Garamond Pro]} or the family name reported by otfinfo might.

Loading a font by display name is no longer the preferred way, though, and you can instead try loading by filename. That is, load the actual filenames you get when you dir C:\Windows\Fonts\Adobe*.otf, with options such as UprightFont = *-Regular, ItalicFont = *-Italic and so on.

Although that isn’t the problem in this case, that is the only way to load a font in XeTeX that is installed as part of the TeX distribution, rather than as a system font.

DONOT double click to install, it will install this font for current user.

right click the font file, choose install for all users 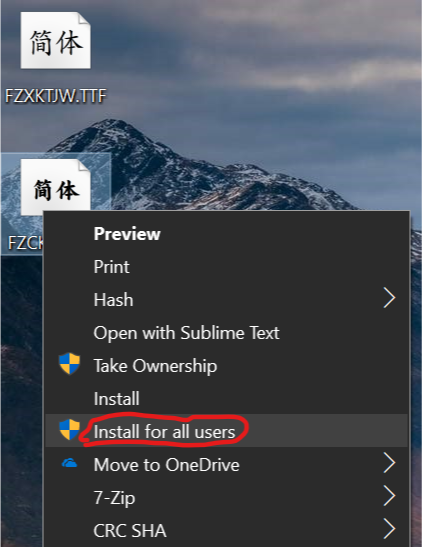 Not the answer you're looking for? Browse other questions tagged xetex fontspec or ask your own question.