I am able to define a command \dashorpoint that checks the next character using \@ifnextchar and depending on that gives me the right result. However, I can't use this command to solve my problem as it does not grab the first character of the theorem body when used in thmtools.

Is there an easy solution to this problem (without defining an extra theorem style)? 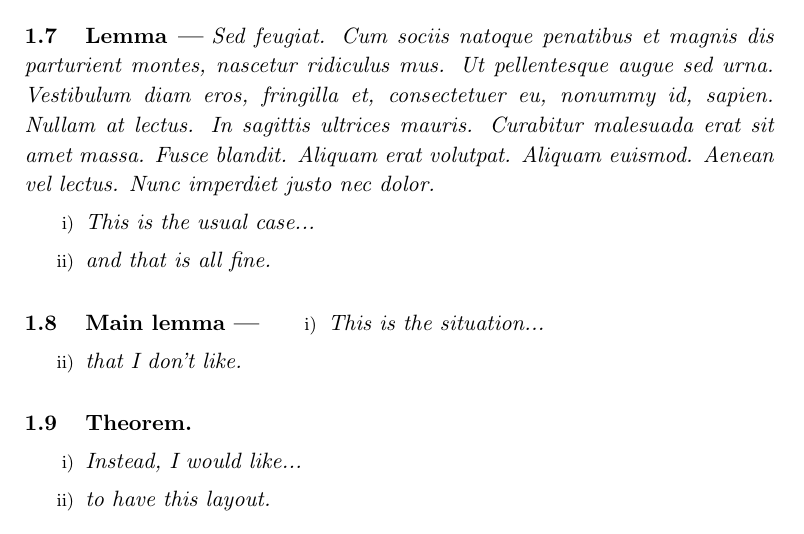 I have used thmtools to create these environments but ideally I would like to use one single theorem style that automatically gives the right output.

Here I have a minimal example: I would like to have one theorem style defined for both cases, and I want to get rid of the ~ symbol that I am adding manually now.

Here is a possible solution. I'm using thmtools' postheadhook key and enumitem's before* key, along with \everypar, to test whether there is a list environment at the start of a theorem and act accordingly. This may seem a little convoluted, but I don't think there's an easy way to do this reliably, and I would argue it's no so bad once you understand it.

So what I'm doing is the following:

21
What does the \the\everypar do?

4
thmtools: how to put xrefs in argument to thm environment?
7
Indent Theorem like \hangindent, but for multiple paragraphs
10
Reference to List Items in Theorem Environment with Label Type “Theorem”
2
numbering different theorem names with thmtools
1
Using "theorem"-like numbering for non-theorem entries
8
Theorem environment : interaction with enumerate/itemize
1
Get thmtools style with mdframed (issues with the title and MWE provided)
1
Have upper and lower bars in theorems identical to lstlisting
2
Dash after theorem number: e.g. Theorem 1'
1
Package 'thm-restate' breaks switching of theorem styles of 'ntheorem'