I have installed and tried SageTeX (using pdflatex, opening the sage console and using pdflatex again). This works fine. I want to get a user command in TeXstudio that calls sage without the need to open the console. I have found the question here that answers this question for Linux and Texmaker. This states that I have to plug in the complete path of sage in the command line: <path>/sage %.sagetex.sage. I was not able to adapt this answer to Windows since in my Sage-folder there are only links to executables and I dont know which .exe I should take. Can someone help?

EDIT: Thanks to Marijn's comments, I managed to get the sage console started with the command "<path>\SageMath 8.6\runtime\bin\mintty.exe" /bin/bash --login -c '/opt/sagemath-8.6/sage -sh 'sage %.sagetex.sage (either with or without --login and/or -sh), but nothing more happens.

As explained below we can work around most issues raised. And here is the customising to run in ubiquitous TeXworks (TeXstudio in detail below).

SageMaths is developed to run with a customised version of Python currently undergoing changes from version 2.7 to 3.x.

SageTex is not provided as a package in Tex Live but is supplied by MiKTeX. Normally if a package is available via the TeX package manager you are encouraged to use it in preference to download from CTAN.

SageTex recommends (in fact requires) that the compatible version dependant .sty is obtained from within SageMaths for that reason you will need to find and copy D:\Programme\SageMath 8.6\runtime\opt\sagemath-8.6\local\share\texmf\tex\latex\sagetex\sagetex.sty to your working folder. This should prevent MiKTeX from using its incompatible version. (alternatively uninstall the MiKTeX version and add the TDS compliant folder D:\Programme\SageMath 8.6\runtime\opt\sagemath-8.6\local\share\texmf in MiKTeX or copy the texmf\tex folder contents to either your local or system texmf\tex)

This is just step one of many pitfalls I encountered. So now you can compile the example or one of your own files with the version that will work with "SageMath 8.6" (note this issue has dogged SageTeX with every version update and is aggravated by having a space in between)

Whilst mentioning spaces POSIX will accept escaped spaces such as '\ ' however in the hybrid calls between windows and POSIX through Cygwin using "/program\ files/" would cause windows to choke so it would be easier to use DOS style short filenames such as c:\progra~1\sagema~1\ etc. however that's not necessary in this case since the application is in D:\path\with\no\spaces.

That raises the next issue which is that Cygwin expects when crossing drives to have a prefix /cygdrive/c for drive c: and /cygdrive/d for d: However by trimming the commands to the bone I eventually dropped all such problems

For all the above reasons, and more, the simple task of calling
sage example.sagetex.sage requires scripting behind the scenes, it would be oh so easy if there was simply a sage.exe to transmute all those problems. so what have I learnt over the weeks of investigation.

1) SageMath is wrapped in layers of wrappers and a law unto itself
2) Prior to installing make a c:\sage\work\ and when asked where your user HOME is then point to that folder.
3) Install sagemath into a directory with no version name (thus no spaces) e.g. c:\sage\app\

Here is your answer, In your case first ensure D:\Programme\SageMath 8.6\runtime\bin is on your path e.g. if running from a temporary command line or in a .cmd file add

either copy or move example.sagetex.sage to your "HOME" directory probably in your case c:\users\yourname then you can simply run

IT SHOULD WORK ! and you will find

all these need to be moved to wherever you wish to second run pdfLaTeX i.e. where your original aux and pdf files are after second run you get the expected results.

To avoid all that messing about we need a minimal script as below, call it any name you like but I called it sage.cmd and placed it in the bin directory D:\Programme\SageMath 8.6\runtime\bin.

The PATH is the ONLY exception to the rule of NO spaces The following script will not work if your .tex is down a path with spaces, Be Warned 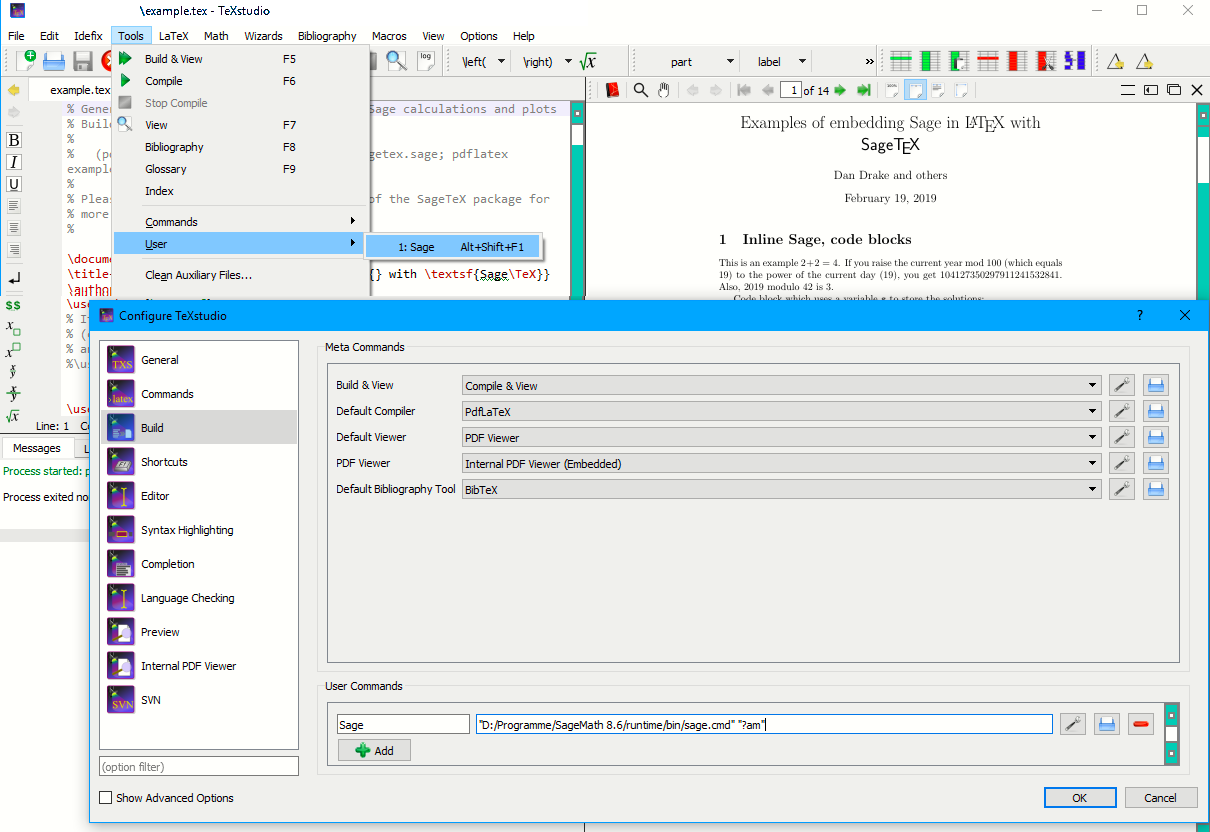 I forgot to mention that if you now have sage.cmd as suggested within sage...\bin on system path then the command for the editor can be simply sage "?am" (at worst sage.cmd "?am")

Also you could have a desktop shortcut pointing to the sage.cmd with a "%1" at the end it will allow you to drag and drop a filename.sagetex.sage file for processing

If you want a .cmd or .bat (they are basically both the same) file to automatically run a tex file through all compiles you can have for example one called say SageRunner.cmd (or.bat)

That should work if you simply drag and drop the filename.tex onto it

I have used "..." in most commands to allow for spaces in the "file name" however there are some places that the call via BaSh (Bourne Shell) would stumble so to make it the simplest (dirty) solution I had to forgo scripting for all drive switching and associated filename syntax checking.

Not the answer you're looking for? Browse other questions tagged texstudio sagetex or ask your own question.

5
How to use sagetex package
3
User defined Quick Build command (sage) does not work in Texmaker
4
arara: sage - A Sage(math)-rule for arara

4
How to pass parameters to Sage from Sagetex?
0
Is it possible to sagetex without Sage installation?
2
Having trouble getting SageTeX working
1
Is it possible to emulate a Sage session with SageTeX?
2
Translate sage input to latex without simplifying
1
Sagetex: problems with layout, and sage results
1
How do I write a custom command to enable Sage in Texmaker?
0
How to use sage commands in a loop?
2
How do i use SageTex in TexStudio