I know gnuplot supports them, but they are drawn using a surface built from the function and intersecting the result with the z=0 plane. How would one implement this work flow directly from TikZ? I know you can easily pass explicit functions to gnuplot but I don't want to split up the implicit function in its constituent parts if it's not necessary.

Of course, it's possible to plot in the gnuplot program and save the results, but I'm curious whether there is a more direct way :).

Probably the easiest thing to do would be to use TikZ's front end to gnuplot. If you use the raw gnuplot option you can pass a more complicated script to gnuplot to make it to what you want (rather than just plot a simple function).

I think it's almost impossible to do within TeX itself, which is after all a text processing system and not a computer algebra system. You could use pgfmath (the math engine within TiKZ) to generate the surface points, and only plot the points where z is sufficiently close to 0. But how would you connect these points?

Another method would be to use the function to write a differential equation and then implement Euler's method to plot a curve. But that probably won't be as pretty as you want—assuming the curve is closed you would have to guess-and-check to make sure you plotted enough to close the curve and not too much to overlap.

There might also be a LuaTeX option but I don't know anything about that.

With PSTricks (If you don't mind to make a try): 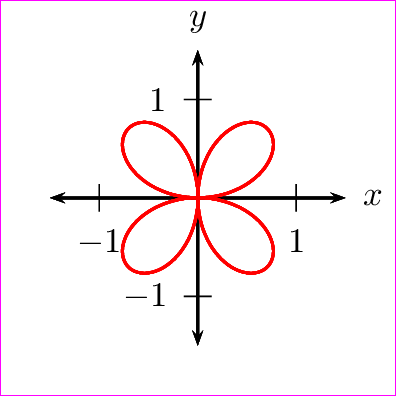 I didn't try it, but it looks cool!

Not the answer you're looking for? Browse other questions tagged tikz-pgf graphics gnuplot or ask your own question.

13
Ploting a function using mplib in lualatex
19
Plotting an implicit function using pgfplots
18
Programming in TikZ
9
How to project a function over a 3D plane
3
Gnuplot and TiKZ: centering plots?
4
Best program/package for creating LOTS of function graphs to use in Beamer?
4
How to plot max/min function in LaTeX?
0
Plotting a function with very small values in TikZ