Texmaker (& similar) - How to \usepackage{svg} especially on Mac OS

I'm using TexMaker on Mac and try to include some svg's to my document.

I think my question is very similar to this one svg package failing to find svg files But I can't solve my problem.

If I put the image.svg in the root directory and call \includesvg{image} the error message changes to:

The export with Inkscape failed for file(svg) `image.svg'(svg) Troubleshooting: Please check in the log file how(svg) the invocation of Inkscape took place and try to(svg) execute it yourself in the terminal

As mentioned in the comments I don't use another output path now! 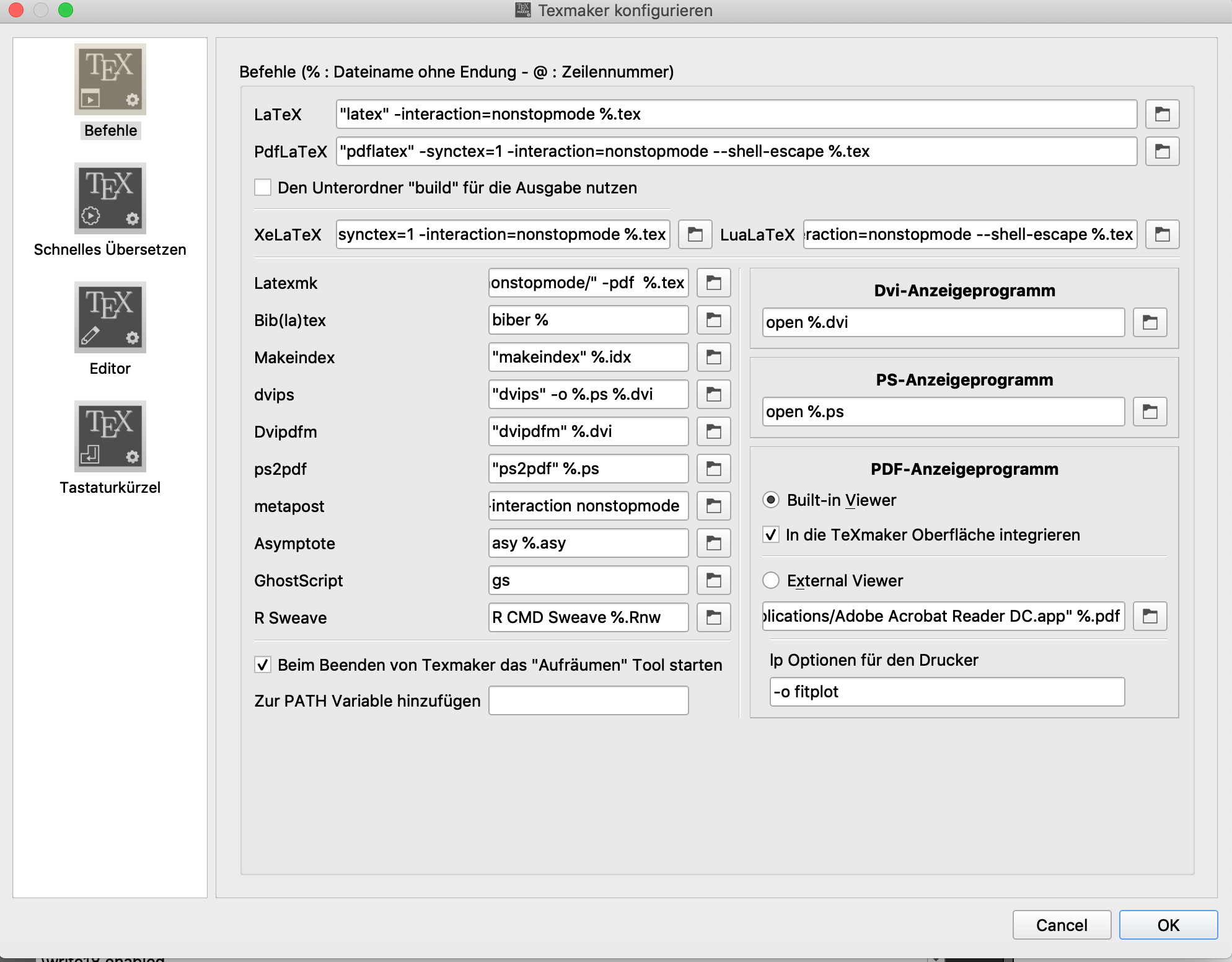 Note that, whilst the questioner has accepted this answer, their problem with \usepackage{svg) has NOT been resolved (see comments below). This is in part due to a known problem with Latex calling Inkscape in Mac OS. The workaround wrapper needs to be called in the same way that Inkscape would normally be. Thus it needs to EITHER be in the $PATH OR called from the editor at a fixed absolute location, the same way as described below. See the wrapper here and the closed issue here

There are at least two packages that interact between .svg / .pdf_tex and inkscape and this answer only addresses one i.e. {svg} thus NOT the {svg-inkscape} package.

There have been a few changes since earlier versions of {svg} (notably use with \pkg{polyglossia} and \pkg{tikzscale}) at present these observations relate to version 2.02b which is the latest in a currently updated MiKTeX (2019) or Tex Live (2018+), both were updated in January 2019. Some older advice is thus misleading but the basics are still the same. Do not expect all older .svg file examples to behave as documented, in those cases raise a separate question. One factor I have not tested is the variations as a result of Inkscape versions (traditionally 0.4x currently 0.9x and soon to be 1.0 upwards) these observations are based on current 0.92.4

This answer is purely how to invoke Inkscape to build hybrid svg files For those already exported from Inkscape you can use \input{images/image.pdf_tex}
This answer is NOT aimed to address why imported results with figure numbers do not function as anticipated.
It is assumed you have installed the package via one of the two main tex managers. I am going to ignore any issues related to downloading to a personal texmf/TDS location (just DON'T).

Whilst testing your setup, place your .svg file in the same folder as your .tex file (note the enhanced MWE below, in answering the question, looks in an _Images subfolder, and can be adjusted to work with a fixed location, so either edit to remove _Images/ or place your .svg in the .tex folder and a library folder), then you will not get the initial inevitable File 'image.svg' is missing message.
You may see in the log

What you are looking for is

2) It is critical Inkscape is active system wide thus available via a system call along "system path". The default action is to call InkScape with the required settings, so do not try to add any of -z -D --export-latex. IF Inkscape is not on path, incorrectly set or otherwise inaccessible you will again see multiple errors as above, and

On windows you may see after that the not unfamiliar line

For Texmaker you can easily add the path to your existing folders at lower left of Option > Configure > Commands NOTE syntax can be different On Mac a colon is used as path separator, whilst on Windows a semicolon is used to prefix a separate path. Remember it is the folder not the executable that needs to be added and on a Mac that may be /Applications/Inkscape.app/Contents/Resources/bin On windows it will probably be in either one of two c:\program files\inkscape folders

NOTE this fix is only applicable to running InkScape from the editor. If you wish to use it system wide (including from a command line console) Either a symbolic link in Mac see https://stackoverflow.com/questions/22085168/inkscape-command-line-where-is-it-on-mac#comment47253346_22085247

For windows users a system path addition will be required. See a guide at https://helpdeskgeek.com/windows-10/add-windows-path-environment-variable/ 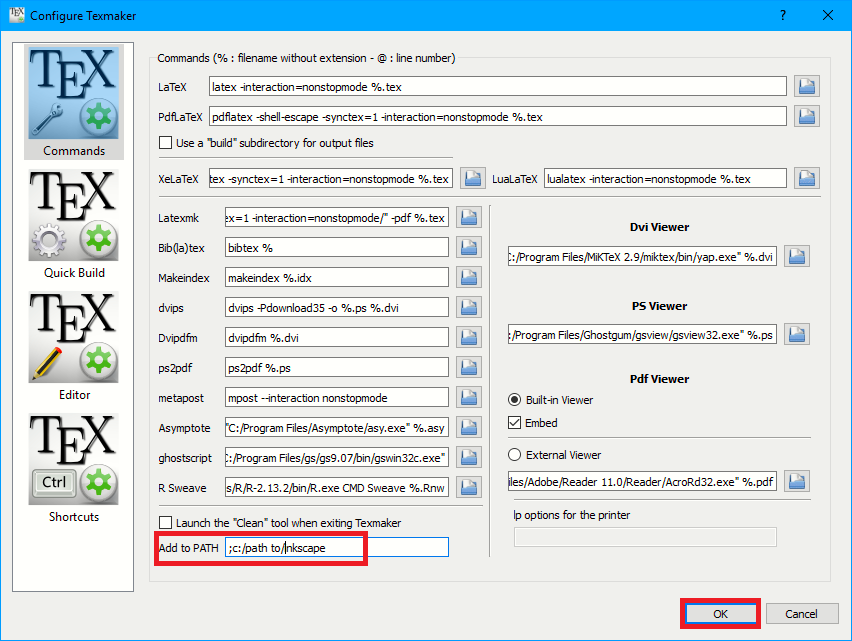 If on a Mac we "add to path" (as shown above) or in the preamble the correct Inkscape binary location e.g. /Applications/Inkscape.app/Contents/Resources/bin then we should expect a reasonable run of Inkscape shown in the log

For TeXworks (Windows) users there is a similar easy fix to add the Inkscape path here https://tex.stackexchange.com/a/474119/170109

3) If in a subfolder the source file.svg must be on a clearly defined / terminated path/, see my comments in the MWE, otherwise you will see similar to above (but only 2nd part)

You can get the same fail if there are problems building the subdirectory svg-inkscape in the working folder. This may be confirmed within the log if you see something like

Do not use older options for image path, otherwise you may see

We may still get warnings on the first run, and its not much better on the second run when we may use \input{images/image.pdf_tex} (but that's a separate Question)
Here is the raw result with the example .svg's as located in your "TeX....texmf/doc/latex/svg/examples/" documents folder. 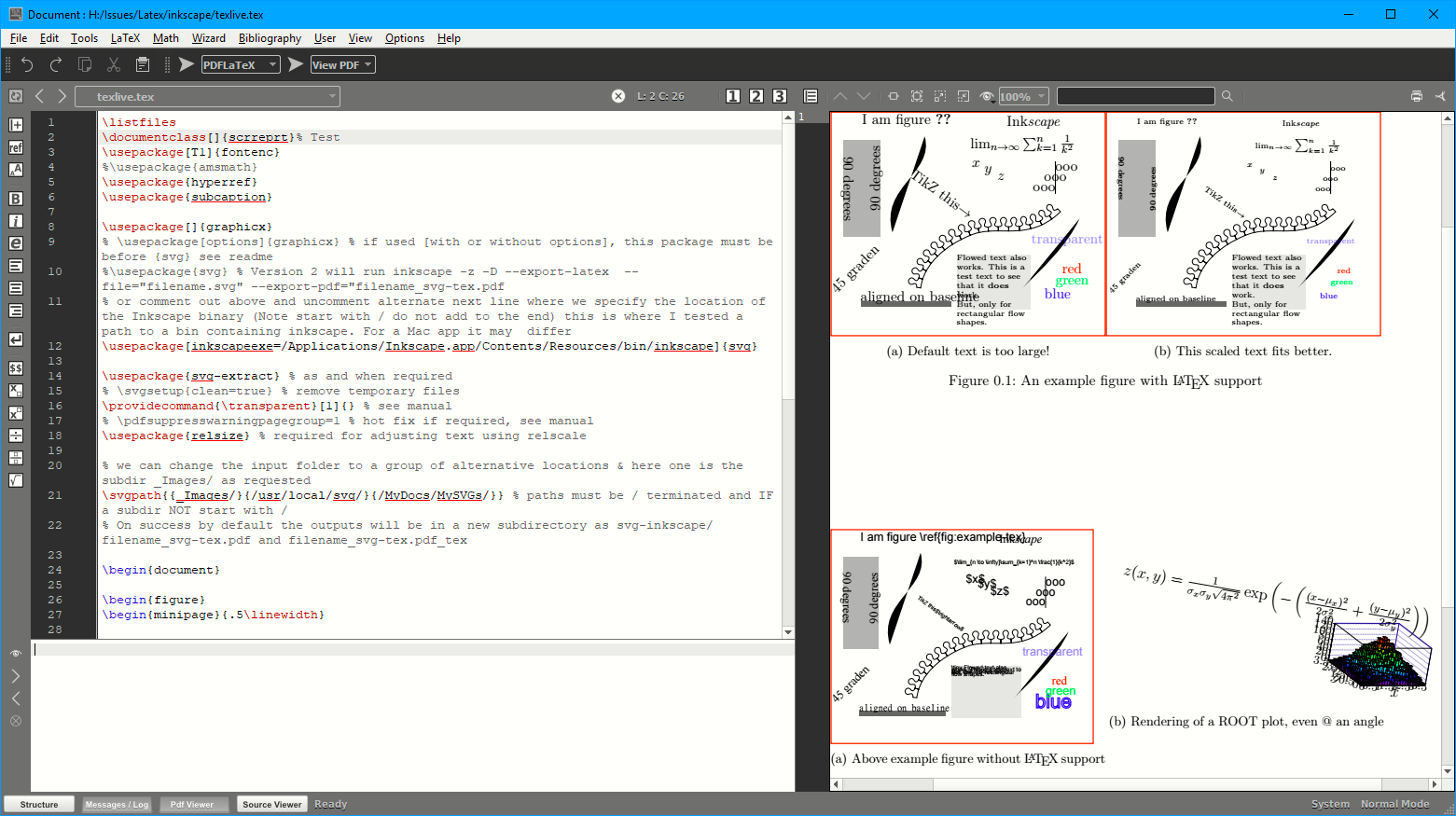 I am afraid that a part of the problem lies within the svg package, which calls inkscape with options -z and --file, neither of which is valid in the current version 1.0 (2020-05-01).

Not the answer you're looking for? Browse other questions tagged texmaker editors mac include svg or ask your own question.

38
How to export svg to tikz
3
How to convert an SVG image with LaTeX in Inkscape, to PNG?
8
\includesvg does not detect SVG file
2
How to make LaTeX automatically call Inkscape to export figure to *.pdf_tex?
6
svg package \includesvg with underscores in svg
1
Trouble converting svg file to pdf_svg using svg package
2
Mactex svg package error: graphaside_svg-tex.pdf is missing
2
Including extensive SVG images, too many pages in the pdf?
4
Includesvg with % sign
2
Inkscape 1.0 not able to export files needed for svg package