I am aware, that it is a feature feature that I need to wrap words in curly braces to keep capitalization.

I can picture three reasonable ways to do so:

What are the implications? Which is the recommended approach?

Consider the following example and its output with the standard plain style that applies sentence casing to titles of @articles, but not to @books. 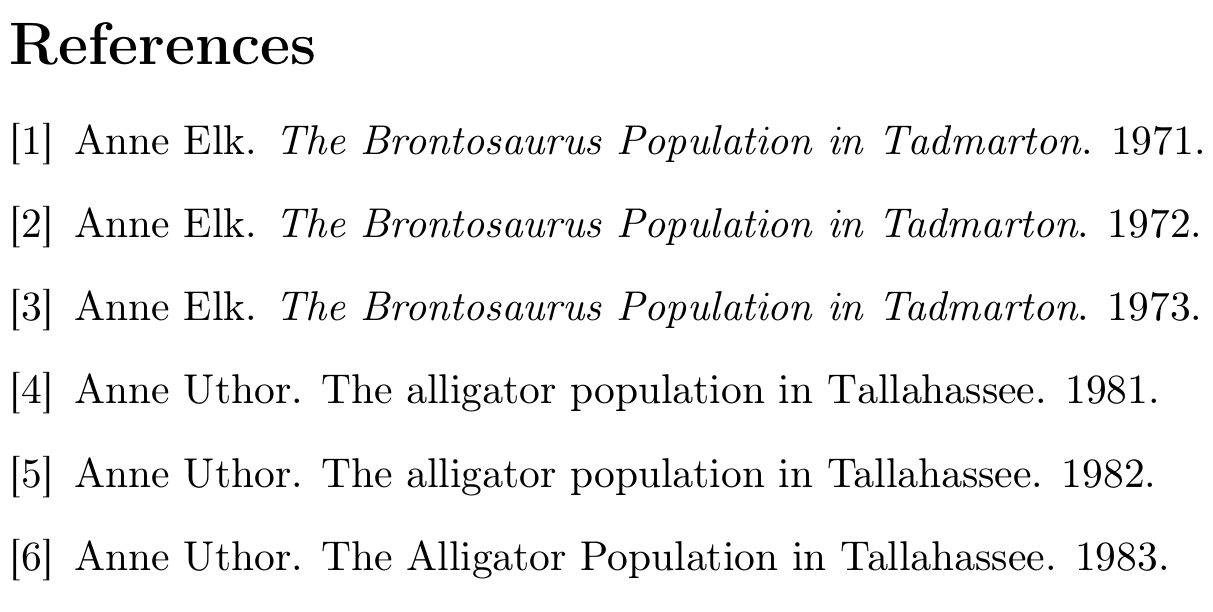 If you look really closely, you'll see that the {T}a approach (...:one) leaves a slightly larger space between "T" and "a" than the other two. That is because in pdfLaTeX the group destroys the kerning between letters (it doesn't destroy kerning in LuaTeX, though). Hence, I advise against method 2.

Furthermore, the completely protected title field (...:three) is never converted to sentence case. Now one might argue that this WYSIWYG approach is a useful way to suppress sentence casing if it is not desired, but I think that makes the entire point of case changing a bit of a farce. If you don't want sentence casing at all, you are better off picking a style that does not apply it rather than suppressing it so cruelly once and for all. I find completely protected title fields particuarly terrible if they are already in sentence case: title = {{A title with words in it}},, one sometimes sees that in auto-generated .bib files and it makes me shudder (see also Software-generated bibliographic entries: common errors and other mistakes to check before use for more things that make me shudder).

That leaves the option of protecting only those words that need protection in their entirety.

I would recommend to input titles in title casing and to protect those words that need protection. Everything else can be taken care of by the style.

See also What is the proper casing to use when storing titles in the bibliography database? and Implementation of "Title Case" in Bibtex.

Not the answer you're looking for? Browse other questions tagged bibtex or ask your own question.

318
BibTeX loses capitals when creating .bbl file
74
Software-generated bibliographic entries: common errors and other mistakes to check before use
13
Implementation of "Title Case" in Bibtex
13
What is the proper casing to use when storing titles in the bibliography database?
0
Changing Formatting of Edited Volume Bibliography Entries
1
Getting `\textcite` to show only author last name when we have a single author
0
Change the case of publication titles in bibliographies created using Mendeley

8
What is the brace depth?
1
Where to disable changing titles to lowercase in a .bst file?
5
A BibTex aware collection manager or tagging files with BibTeX records
5
Copy BibTex information to Mendeley
0
Fixing the all capitalization of bibtex with texstudio macro at once
0
How to preserve custom .bst format, but prevent loss of capitalization?