How to left align a text in IEEEeqnarray environment?

I am using IEEEeqnarray environment and want to left align a text. How to do that?

without an example, this is untested, but if the IEEE class doesn't provide anything for this, the TeX primitive \noalign probably does something similar to what you need.

There are a few things wrong with what you are trying to do. For example, you haven't given IEEEeqnarray the column alignment specifier. Note that, as you appear to be using \text you must have the amsmath package loaded. I won't use that, but we'll come back to amsmath in a moment. A minimal working example for your equation may be the following:

Note the addition of the column specifier {lrCl} when beginning the environment. The l will be used to left align the text and the rest is reasonably clear. Apparently the C is capitalised to give a little more space either side of that column. Note also the addition of \nonumber and \\ for your text to suppress numbering and start a new row. I have also used \mbox so that I don't have to load the amsmath package. You also missed out the necessary & characters for alignment. This looks like:

Now, I don't think I've ever heard of the IEEEtrantools package before, and it's better to use a more supported and feature complete package like amsmath. The amsmath package happens to have a command just for what you want to do (\intertext{...}), and provides a number of useful display mathematics environments. The closest to what you want is the align environment:

This aligns the text to the far left (which is perhaps what you really want). Note that it's far simpler to get this output, with no column alignment specifier needed, and only a couple of & characters. The vertical spacing between the text and the equations is also far better. 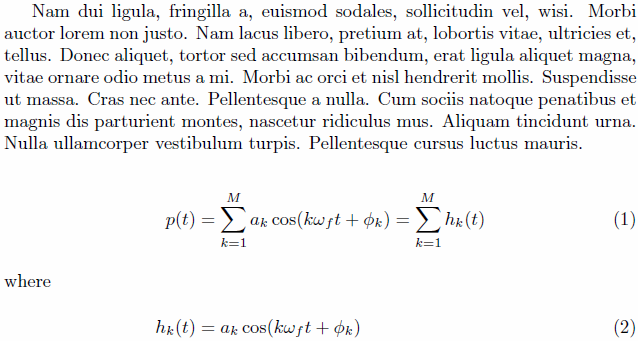 Not the answer you're looking for? Browse other questions tagged horizontal-alignment equations ieeeconf or ask your own question.

14
aligning a multiline formula with the bullet of itemize
4
Adjusting the width of a displaymath environment
5
Can't generate png with Error: Erroneous nesting of equation structures
2
Is there a way to put two labelled equations into one \begin{equation} and align both of them at the beginning?
2
Left align text in equation environment (no use of align environment)
1
Aligning equations in an exam document
7
How continue an equation next line
1
flush text on the left and centre equation of the same line (not working!)
2
Prevent Line Break Before flalign* Block in Itemize Environment
2
How to change “column” width in align environment?