How can I replicate the style of the quotes in Knuth's “The Art of Computer Programming”?

How can I replicate the style of the quotes in Knuth's "The Art of Computer Programming"?

I mean the quotes found at the beginning and at the end of each chapter, for example see the following one which is a one-liner: 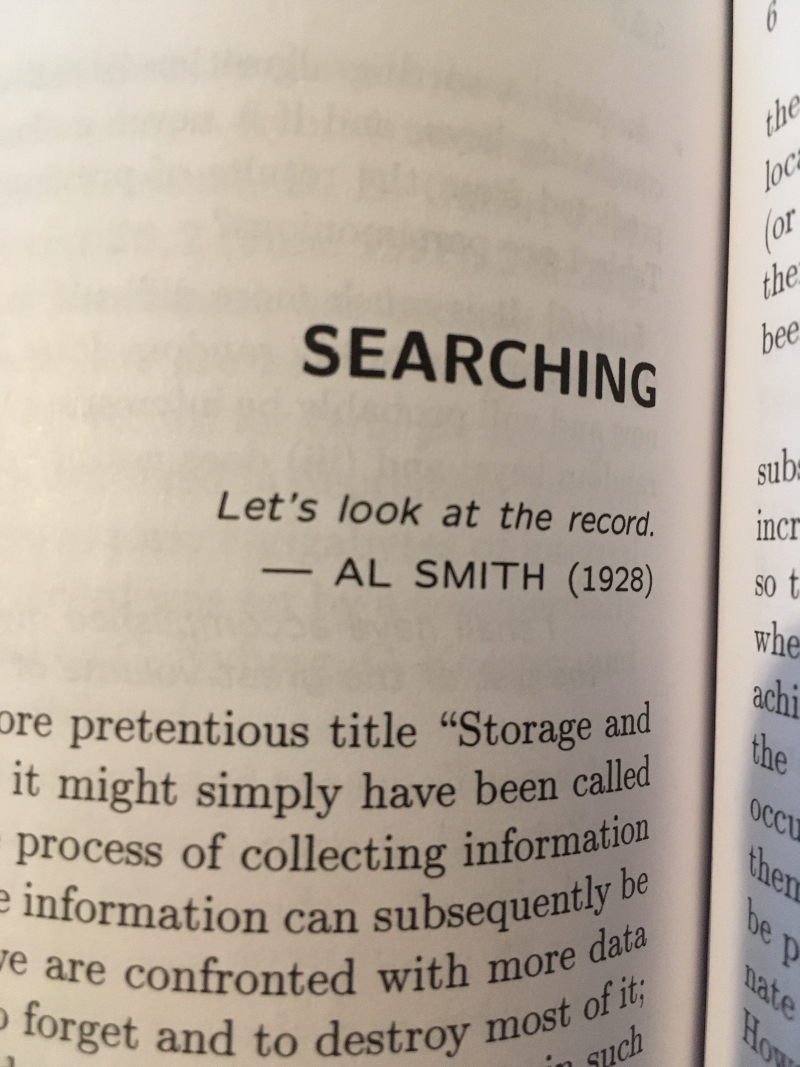 or the following which spans more than one line: 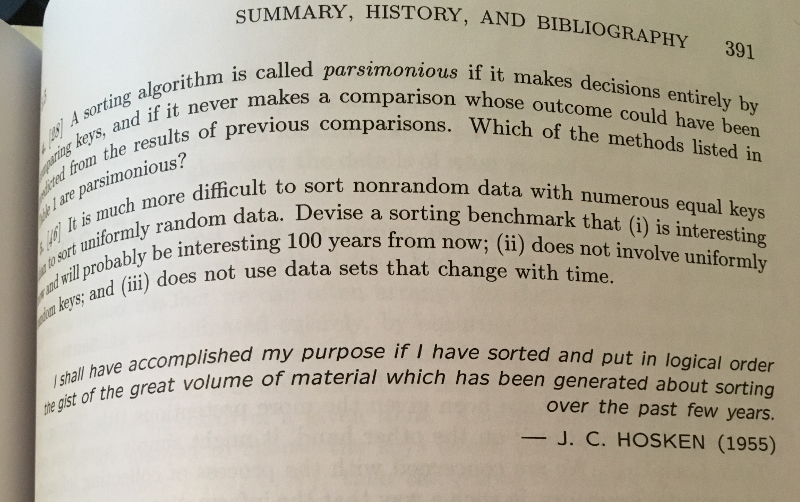 Well if you literally want to replicate what Knuth did, you could use the same macros. The macros he used/uses for The Art of Computer Programming (TAOCP) are available as taocpmac.tex, and the relevant ones for the examples in the question are \quoteformat and \author. Download taocpmac.tex, comment out the \input figdir.local line at the top (or create a file of that name) and do something like:

Compile it with tex or pdftex (or xetex or luatex, i.e. not any *latex):

If you don't want to pull in all of taocpmac.tex you could copy over just the relevant macros, and you can even dress them up in superficially LaTeX-ish clothing if you prefer:

Adjust the skips and line breaks as desired. Although you may get something passable even without manually chosen breaks, DEK chooses the line breaks manually — that's the reason the definition of \quoteformat has \obeylines in it, and my “LaTeX” example above has \pars in the second quote. LaTeX users tend not to like such things. If you're in the same category, you can try to find a LaTeX package that does what you want. For example, as mentioned in the comments on the question, you can use epigraph:

but the appearance isn't the same as in TAOCP.

Historical appendix: How do we know that this is how DEK enters the quotes, besides the fact that these macros exist in taocpmac.tex?

Well actually I don't know about the surrounding { and }, but as for the rest (\quoteformat and \author), in fact this is something that hasn't change substantially since the very first “design doc” that DEK wrote for TeX back in May 1977, before a single line of the TeX program had been written. In these (TEXDR.AFT and TEX.ONE, published in Digital Typography) he wrote down what he'd like to type as input, and it's basically the same. Later, the older TeX manual (e.g. the one published in TeX and METAFONT: New Directions in Typesetting) actually went into great detail on how the input to TAOCP was done, in its “Appendix E: Example of a Book Format” where these macros were in a file called acphdr.TEX at the time, and it even says “For quotations you type ...” and gives \quoteformat and \author. (The current TeXbook in its “Appendix E: Example Formats” instead explains manmac.tex which is used to typeset The TeXbook itself, and you can also look at how quotes are done in texbook.tex) There's also mention of acpmac.tex in this TUG 1995 interview, and finally it's now called taocpmac.tex.

Not the answer you're looking for? Browse other questions tagged quoting knuth or ask your own question.

5
Quote environment with long reference at the end right – without widows
58
What's the advantage of using csquotes over using an editor's auto-replacement for "?
85
“direct” quotations and “entire paragraph” quotations
1
Problem with space in chapter and quotes
1
Can I tighten up the white space with this custom fancy chapter code?
5
How to enable/disable automatic quotations marks and control indents with csquote and \blockquote
1
Reproducing formatting of MIX words/Text across multiple cells of a table
6
Quotations in math mode using \enquote command from csquotes package