Why does adding a \Bar in a differential equation cause all these errors?

The line in question:

The second \Bar{\mu} (bolded for clarity) seems to throw everything awry. Omitting the \Bar (just having '{ \mu }') works just fine, everything compiles with no errors and displays as expected. Including the \Bar gives me 44 errors, the first few of which would suggest I forgot a '}', but I've checked and triple checked, and I can find no missing or mismatched brackets.

I'm guessing there's some quirk of \diffp* that's causing this, but it's what I've used everywhere else in the document, and I'd rather not have to go back and change them all to \frac for consistency. So how do I get a bar on the bottom with \diffp*, and why is my way incorrect?

You seem to have missed out the {} of one argument, but some failing in the \diffp macro requires it to be doubled. 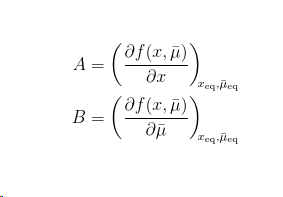 Not the answer you're looking for? Browse other questions tagged equations errors compilation-error or ask your own question.

3
Enumerate and itemize undefined + captions not working
2
Why does hyperref/hpdftex.def v6.81u cause an error for me?
5
Where are all these errors coming from?
17
Why does \mathbb{R} cause '! Undefined control sequence. - \GenericError'?
5
Why do these three changes fix this equation-numbering error?
2
How can the go to summary be fixed so the \section[Some]{Some more} does not throw all these errors?
3
Biblatex and Musixtex clash
5
Why does nesting some xstring commands causes errors?