'Dimension too large' error when \setmathfont has the option Scale=MatchLowercase

The above code when typeset with XeTeX produces an error saying 'Dimension too large'. Removing [Scale=MatchLowercase] resolves it but I need the option for the combination of other text and math fonts I'm using.

This issue seems recent. The last time I typeset a XeTeX document that uses unicode-math and contains \sqrt[n]{n} was about a year ago and the issue wasn't present at the time. Is there something wrong with one of the latest versions of unicode-math, namely 0.8m or 0.8n?

Nevertheless, the output PDF file is fine. I'm not sure if I should be worried, but having to keep dismissing the error is inconvenient. As a workaround I'll use the notation ^{1/n} for now.

As of unicode-math v0.8o (2019/03/04), this bug is fixed for normal Scale usage. The update includes a variant of Ulrike Fischer’s answer, and more crucially, a sloppier setup for font dimensions in fam 2 and 3.

If the requested Scale is below 0.153, then the font dimension problem persists. But it was deemed that normal usage would never produce Scale=0.153 or lower, so we are safe for the most parts. See more detailed analysis here and here.

Although I agree with Ulrike Fischer that this is a unicode-math bug, I’m afraid that I have to disagree with the claim that “\__um_fontdimen_to_percent:nN is broken”. Indeed, using \dim_to_decimal_in_sp:n is a great improvement, but it is not where the actual problem lies. I shall first present my solution and then try to discuss the root cause.

Note that the following solution is meant to be temporary until unicode-math fixes this in the next release.

For a relatively simple solution, you can use the new feature ScaleAgain to slightly distort the font size (it won’t be visible to the human eyes):

In practice, you’ll have to try a range of ScaleAgain near 1 to be able to compile. Again, this shall be fixed in the next release of unicode-math.

For those who are interested in the bizarre overflow behavior, here is a theorem, based on the two fixed ScaleAgain factors in unicode-math v0.8n.

First comes the visualizations on which Scale’s are safe and which may cause problem:

Here is the rigorous mathematical description: 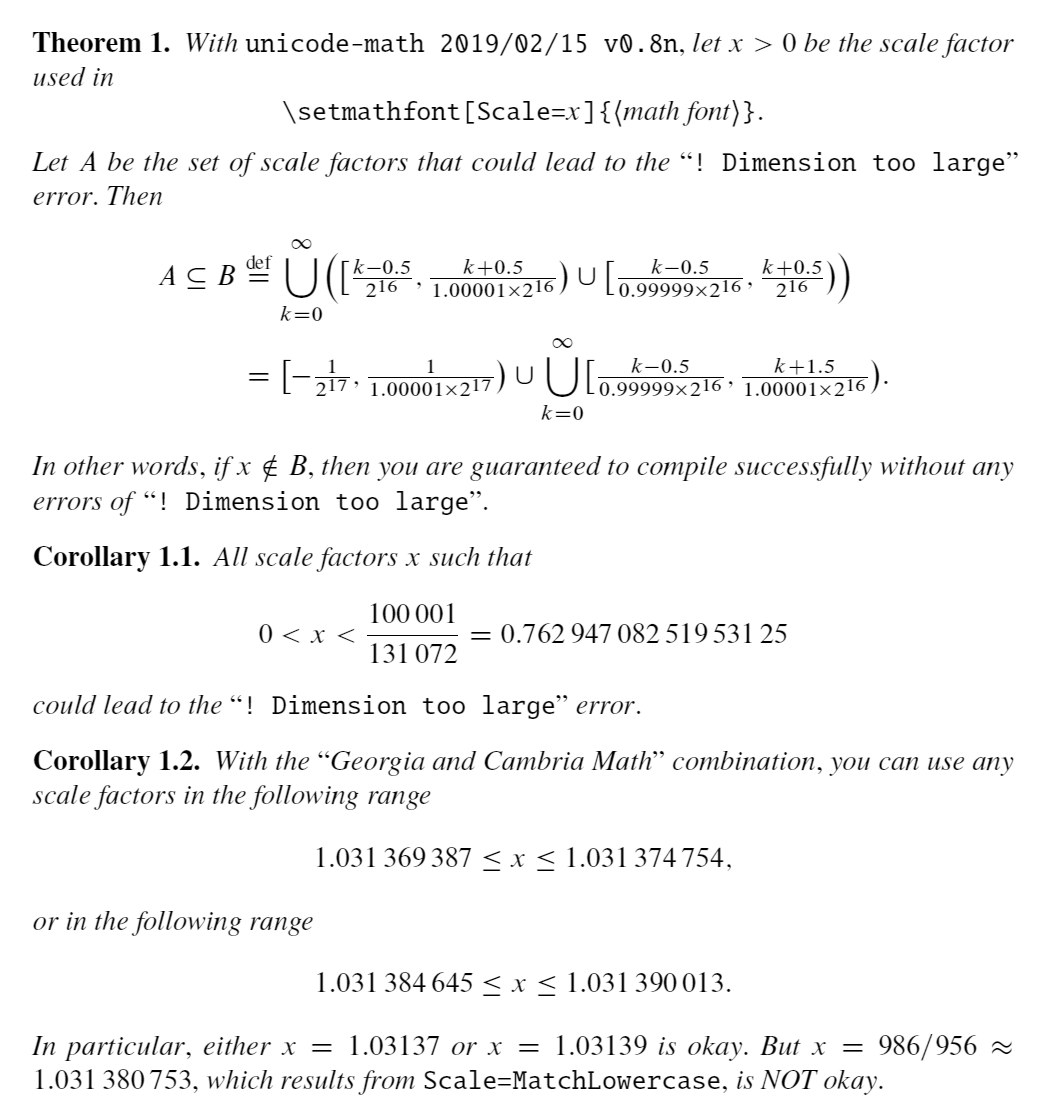 The x-heights of Georgia and Cambria Math are, respectively, 986/2048 and 956/2048. And Scale=MatchLowercase is correctly converted into Scale=1.03138 by fontspec. Now, if we were to apply the suggested re-definition of \__um_fontdimen_to_percent:nN when using Latin Modern Math, we would be surprise to find out that:

Even more strangely, if we instead use a scale factor of either 1.03137 or 1.03139, then your Georgia + Cambria Math example compiles successfully, and so does my Latin Modern Math example (with or without the re-definition of \__um_fontdimen_to_percent:nN).

The root cause of the problem is the new feature ScaleAgain from fontspec, which is meant to solve a long standing problem (see Superscript placement using unicode-math with scaling and Scale option doesn't fully work with LuaLaTeX). Oh, and also the fact that TeX is “not good at math”.

To setup the math-related legacy font dimensions correctly, unicode-math must load the same math font three times. But TeX wouldn’t allow the same font to be loaded twice at the same size, so unicode-math has to load the font at slightly different sizes for the 2nd and the 3rd times. These slightly different sizes are obtained by compounding the previous scale factor. This was the main reason that ScaleAgain was introduced in fontspec, so unicode-math can do ScaleAgain=1.00001 for the 2nd time and ScaleAgain=0.99999 for the 3rd time. As my comment pointed out, sometimes unicode-math will fail to distinguish the three sizes due to TeX’s binary arithmetic.

With \setmathfont[Scale=MatchLowercase,ScaleAgain=0.99999]{Cambria Math}, we are basically trying to prevent TeX from loading the math font at the same size accidentally.

Not the answer you're looking for? Browse other questions tagged xetex unicode-math bugs or ask your own question.