I'm after a definition of a command that could have multiple values to use in different contexts. The use case for this would be in a custom class that uses two languages simultaneously, or I guess any situation where a variable could have different values depending on the environment. After searching information on \newcommand and things related to it, I'm still a bit puzzled about things.

As I understand it, a simple implementation would be:

However, having different commands for same things gets ugly in my eye. For example, I have in front of me an old class with commands like Doctype and Doctypefin for the Finnish version. Instead, I'd like to use the command like this:

Is there any way to construct such a macro or definition?

Ideally, specifying unseen categories (here languages) would not be a problem, but I can see it would be reasonable to require specifying the accepted values in the class file. Also, like in the example below, I think it would be acceptable to have a separate command for outputting the variable, if that's a problem.

I've tried to take note of the way other class commands are constructed. There's a handy MakeStringVar command that constructs a variable, and if not set, displays a default text. That default text functionality would be very useful for the new command, because loads of the environments in the class use the definitions to output text to title pages etc.

But I'm a newbie when it comes to LaTeX, so I'm not sure where to even begin. I have a feeling the above command could be expanded in some manner, but I really don't know the limitations of LaTeX macros.

You may consider this approach which uses \@namedef:

When the user calls \deftitle[en]{<content>}, a new macro title:en is defined and it expands to <content> when called via \@nameuse.

EDIT: Here there's a general way to construct such macros:

In this implementation the various versions are input with a handy key-value interface (brace the value if it is to contain a comma).

Also aliases for keys can be defined. For languages, I think it's preferable to use long keys with the full language name, so \languagename can be used to get the related string. However, aliases for keys can also be used in the document, provided they're defined beforehand.

You're not compelled to add all versions at the time of a variable definition as you can use \addtovarstring later. 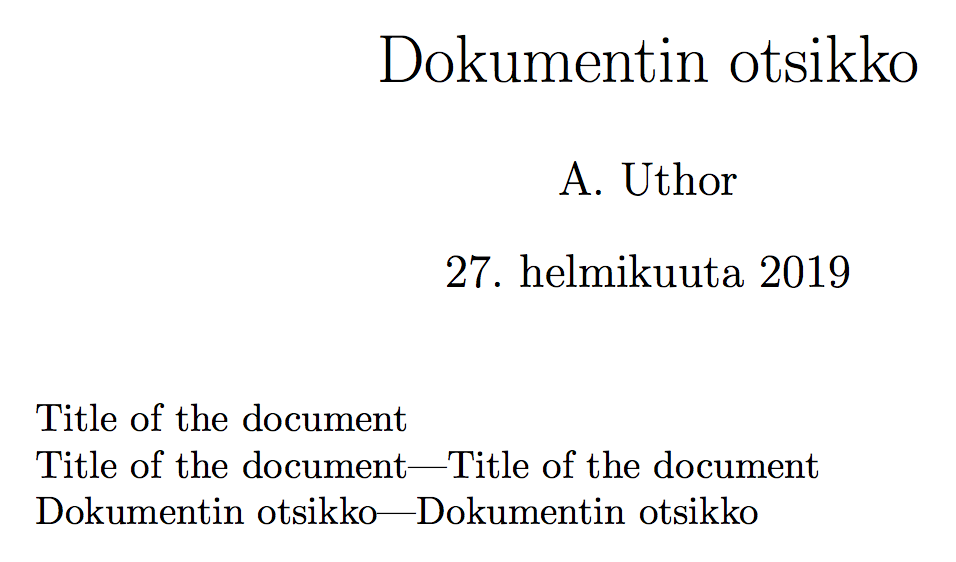 Some time ago I wrote a \SetProperty-\GetProperty-interface.

Probably it is of use to you.

Not the answer you're looking for? Browse other questions tagged macros variable or ask your own question.