How to establish node-anchor-like points on a (tikz) rectangle path (is there a better method than the one described)?

Rectangles can be drawn with tikz in a number of ways, one way of doing so is to define a rectangle node as follows:

A useful feature of this is that, as a node, it has anchor points around it such as rectangle.north, rectangle.south west and so on.

Another way is to draw a rectangle path, like this:

I would like to be able to use this second path-based method* but also be able to have (some) named anchors on the path.

Approach from the time of asking

The method I had for this is demonstrated by the following MWE (inspired by this inventive answer and later improved by Altermundus' comment):

Obviously this only defines anchors for center, north, north east, and south west, but it can be fairly easily extended to provide south, east, west, north west and south east (as demonstrated in my answer).

As pointed out by Andrew Stacey in his answer, there was a slight discrepancy between the positioning of these pseudo-anchor coordinates and the anchors on a normal rectangular node. The edge-based solution above originally placed the pseudo-anchors exactly on the coordinates of the rectangle whereas on a rectangular node they would be placed at the outside edge of the lines of the rectangle. Although this was only likely to cause issues with thick line widths I have now added some x/yshifting to the above code to compensate.

Node rectangle labelling code to illustrate the key to the colours (and for the generally curious):

Back to the question

Is there a neater/better way to establish node-anchor-like points on a rectangle path* than the method given in the MWE above?

* = An equivalent drawing method that also allows specifying a rectangle by corner coordinates would be more than acceptable!

I think that the best way to establish node-like anchors is to use a node. I'm guessing that the annoyance of using an actual node to draw the rectangle is that specifying a node rectangle by its coordinates is a little more complicated than just saying (0,0) rectangle (3,2). So here's some code that puts an invisible (rectangular - but that's only because the default is a rectangle) node around the current path. If the path is more complicated then the node is guaranteed to contain the rectangular bounding box. 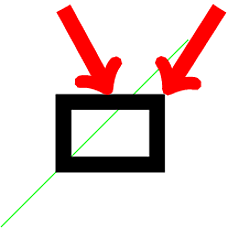 [1]: With your method of specifying anchors via coordinates, the anchors would be on the "theoretical" path, namely the north west anchor would be at (3,2) not (3 + half line width, 2 + half line width). If you prefer this, it's easy to modify this method to do that.

Edit Now copes with scale=2 as Altermundus asked about. With more complicated transformations then it gets increasingly difficult to keep track since nodes work differently, and it is working on the actual bounding box rather than the path itself. So in those cases, caveat texer.

Finally I found what I want Without node, you can use scale easily.

Edit: Compensated for the anchor-positioning issue with some nifty x/yshifting - Staves ^^ 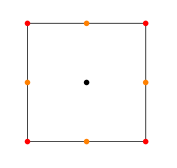 We can see, there are many solutions, I'll propose a new

you can choose the number of points 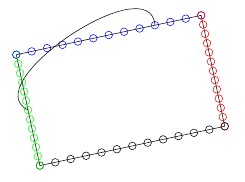 You can use the fit library to draw a rectangular node.

You don't need to draw the original rectangle, just two corners. With inner sep=0pt the fitting rectangle adjusts to the defined corners.

The result of this is as follows (the initial blue rectangle is drawn over by the node command): 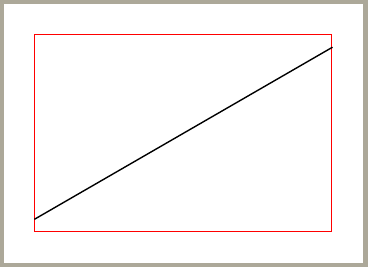 A more minimal example for general use:

I add another answer because in my first answer I did not want to use the notion of node. I think it's not in the spirit of TikZ to impose these kinds of conditions to a node but if you want a simple code to this:: 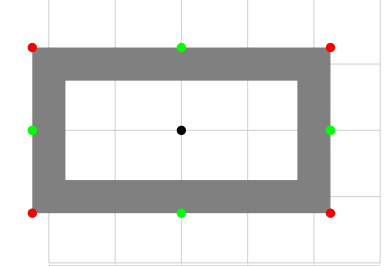 I mentioned in my question that the edge-based solution I presented could be expanded to provide the remaining anchors. Here is a quick demonstration of how this could be done:

Edit: Added some nifty x/yshifting to compensate for the anchor-positioning problem ^^

Which produces this (cropped): 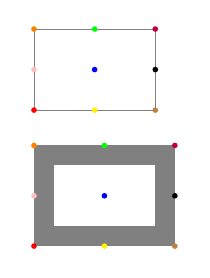 This is definitely not the most elegant solution, but I'm providing it just in case it's informative to somebody.

10
Rectangle node with given coordinates in tikz
0
Creating a rectangle with TikZ using "\draw ... rectangle ..." how can I add relativ labels to edges and corners?
50
How to set exact radius for a node?
13
Why is this let expression not working in TikZ (calculating a midpoint)?
9
tikz/foreach: Protect space after "iteration variable"
6
In tikz, is it possible to define a node and set its position later?
6
Tikz overlay with subfig, axis & externalize
4
How can I add a node on top of a rectangle path?
4
How can I add more coordinates to standard TikZ shapes?
6
Move / position tikz \draw plot in reference to a node?
See more linked questions

5
How to have one straight arrows surrounded by two curved arrows (TikZ)
1
Define tikz node based on pagenodes
6
Computing the rectangle encompassing a node and a point
4
Draw a transparency gradient arc over a rectangle with tikz
7
TikZ graphs: Specify edge target anchor
2
Anchor tikzpicture to other tikzpicture
6
How to position an element relative to an anchor?
2
Coordinate Frame around Picture
3
Document header with tikz
2
Tikz: check if a node has an anchor, and check the shape of the node