How to invoke makeglossaries from Texmaker

I have tried several things, they all worked (I even successfully created a list of references). But now I have troubles when I to try to add a glossary to my document.

I think I have done everything right, but when I compile it (click on »Quick Build« in Texmaker) I only get this:

This is some text talking about Light Amplification by Stimulated Emission of Radiation (LASER) and light-emitting diode (LED). Did you know, that LEDs can be used to emmit LASER-light?

Another topic is how to use a computer.

I found a LaTeX-wiki about glossaries. Quote from this wiki:

Building your document and its glossary requires three steps:

But how do I call makeglossaries from Texmaker? The button labeled »Quick Build« can be turned into »BitTeX«, »MakeIndex« and some other commands, but »makeglossaries« is not among the options. I think it should be there, but it isn't. And I can't find any other command in Texmaker to run makeglossaries.

I also tried the same on Windows 10. I have the same problem there.

First be aware that MakeGlossaries requires that Perl is on path (otherwise the call will fail) Verify whether 'makeglossaries.exe' is available on the system path by typing makeglossaries at a command prompt if you get the following

'makeglossaries' is not recognized as an internal or external command, operable program or batch file.

Then your path to TeX binaries is wrong, so fix it.

Then either Perl is not installed or is not on path 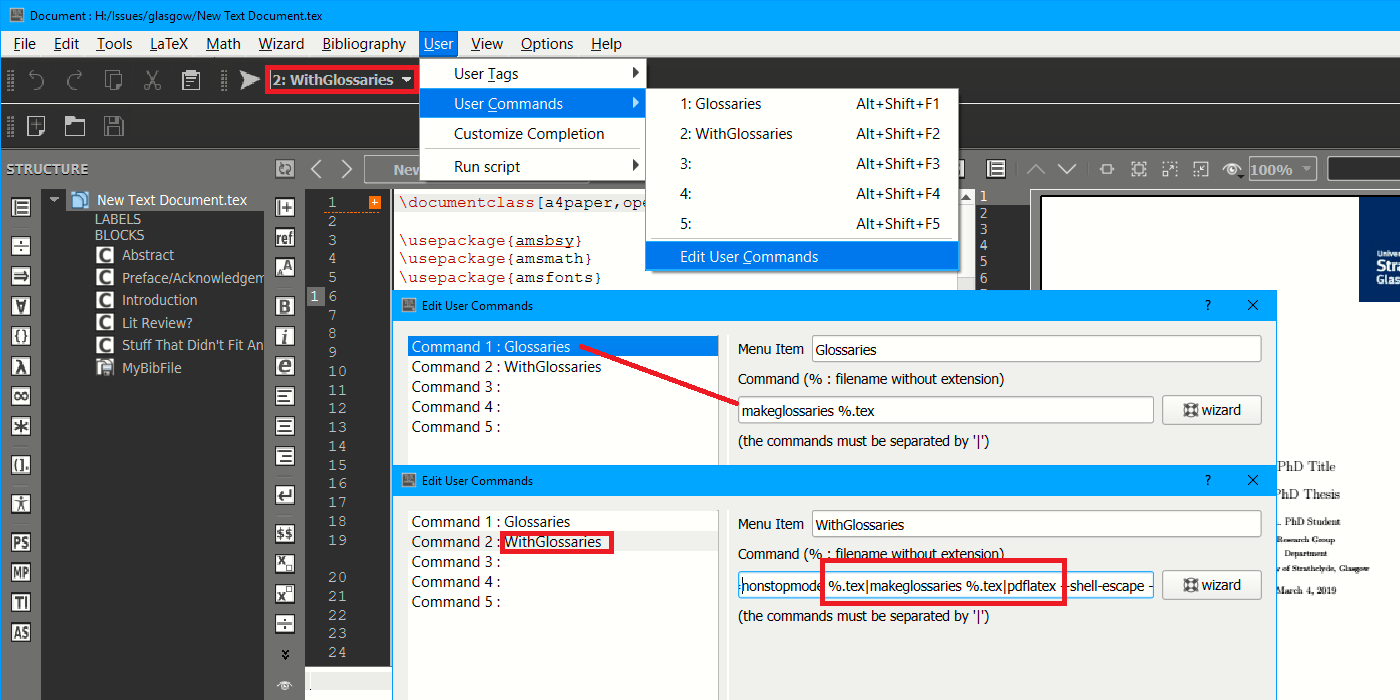 The first one for manual sequencing is easy just enter makeglossaries %.tex note that it may work just as well or better without the .tex

The second request to have a sequence of PdfLaTeX > makeglossaries > PdfLaTeX is a little trickier. I find it easiest to click on the wizard to add three pdfLaTeX in a row then go back and edit the |middle| one to the desired command.

Not the answer you're looking for? Browse other questions tagged glossaries texmaker mac or ask your own question.

17
Using Texmaker with glossaries on Windows