Is a \vspace placed on the end of a paragraph a bad LaTeX coding?

After a comment of @DavidCarlisle in a question about \vspace usage I tried to find out if, when and why a \vspace command should be avoided to added as a last command of a paragraph in order to add or to remove space between paragraphs, like:

"the blank line should be before the vspace. Using vspace in horizontal mode is well defined but weird, you almost always want to avoid that."

So, the proposed "correction" (as far as I can understand) is:

But I tried many examples and didn't found one that would give an unexpected output (in order of vertical spacing, but general too). Also, in my first LaTeX steps I was using this style:

that now seems awful to me but could be consider as better LaTeX coding from my first example (the style that I am currently using).

So, my question is:

and output of MWE: 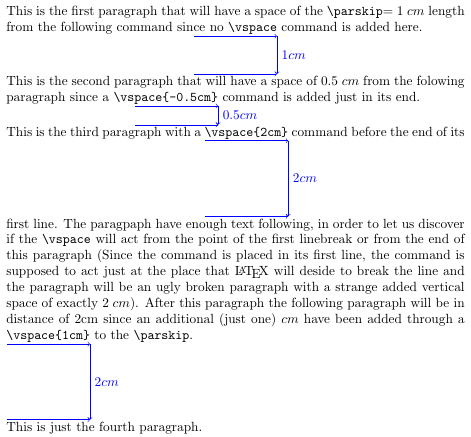 You should almost always precede \vspace by a blank line or \par.

In practice the difference should not be an issue as there should almost never be explicit vertical space commands within the document. If there are, it is usually a sign that the global spacing set up by the class is not suitable for the current document and it is better to fix that at source rather than adjust spacing in each individual paragraph.

Not the answer you're looking for? Browse other questions tagged spacing paragraphs vertical horizontal or ask your own question.

13
Define a command to affect everything until the end of the paragraph?
3
Inhibit indentation in paragraph after using the "quoting" package
0
Spacing between "clamped" paragraphs bad at end/start of page
15
Removing a space placed after a linebreak at the end of \lstinline
3
Indent paragraph both on the left and right without any external packages
2
Add text at end of paragraph that has an \hbox:n
1
Set vertical space after paragraph depending on the following text
1
\hfill -like command in the middle of a paragraph
1
Align all text in bullet