This results in (using ShareLaTeX, if it matters)

It seems to have something to do with how I've got biblatex configured, because it works with natbib. I would like to be able to use the \u{c} or {\u c} syntax instead of inserting the UTF8 character directly.

Update: @moewe pointed out that I probably meant {\v c}, which makes Biblaex happy. I think this question is still good though: what should I do if I did need {\u c}? Why does natbib happily print {\u c}, while biblatex throws an error?

Biber converts all ASCII-macros into their respective Unicode code points in order to be able to sort strings properly. In this case \u c gets converted to c̆ (U+0063 LATIN SMALL LETTER C+U+0306 COMBINING BREVE) because it has no combined character representation. Note that this conversion happens independent of the input. It does not matter if you write \u{c} or c̆ in the .bib file. Biber will always have the combination c̆ internally.

With \usepackage[utf8]{inputenc} Biber will output UTF-8 to the .bbl file, so that file will contain c̆. pdfLaTeX (with inputenc or without it) can not deal with combining accents (one of the issue is that the accent comes after the character it attaches to...) and so you get this error.

For full Unicode support you should consider using a Unicode engine (XeLaTeX or LuaLaTeX). pdfLaTeX will always only support the parts of Unicode it can easily deal with, combining accents don't fall into that category (cf. Is there a way to get pdflatex to accept Unicode combining accents?). 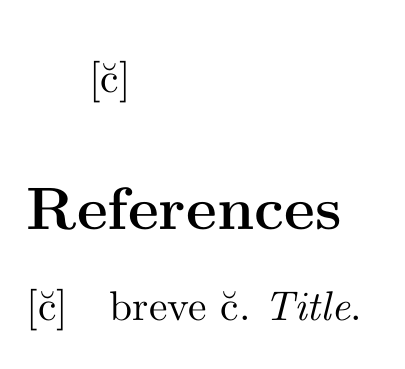 The issue does not occur with natbib or generally with BibTeX because BibTeX makes no attempt to convert {\u c} into its Unicode counterpart for sorting (it will just sort the character as c). The character is passed on unchanged as {\u c} to LaTeX.

As it turned out in the comments you actually want a c with caron/hachek (\v{c}/č) instead of c with breve (\u{c}/c̆). Because č has a precomposed Unicode character that LaTeX is set up to deal with properly, \v{c} will just work. I still find it nicer to input it as č and not \v{c}, but as mentioned above the input is not actually relevant because Biber performs a normalisation of the input anyway.

Not the answer you're looking for? Browse other questions tagged biblatex input-encodings or ask your own question.

15
Input encoding error after upgrading from Biber 1.9 to Biber 2.1
6
Why is caron treated differently than breve
15
Is there a way to get pdflatex to accept Unicode combining accents?
3
Trouble in biber with “ḥʼḤ”
0
Nocite like command in biblatex?