use tag as biblatex key

I see there are many styles for biblatex to generate the "keys" automatically in the bibliography, but I would like to use the actual cite key, so that I can completely customise it myself.

For instance if my entry is

It seems so simple but cannot find what "style" this is. It seems to be the "abstract" style but biblatex tells me "style abstract not found".

Edit: the reason why I use biblatex is because I need two separate bibliographies based on some keyword, so if someone knows a way to do that with traditional bibtex (whatever that means), I'll take it!

Naively, I would have thought that

should work for an alphabetic base style (and would be one of the most idiomatic solutions). That does not seem to be the case for Biber 2.12, so I opened https://github.com/plk/biber/issues/259 at the Biber bug tracker.

citekey instead of entrykey works. In the Biber versions from 2.13 onwards entrykey is also accepted.

In the meantime here is a work-around that copies the entrykey to the shorthand field. Since the alphabetic style uses the shorthand field as an 'override' for the label, copying the entrykey to that field will cause the entrykey to be the label. The mapping will not overwrite an existing shorthand. If you want that you can add [overwrite=true] to the \map directive. You can read more about source maps in the biblatex documentation, §4.5.3 Dynamic Modification of Data (pp. 182-193). Essentially source maps allow you to manipulate the contents of fields of .bib entries dynamically from the .tex source. 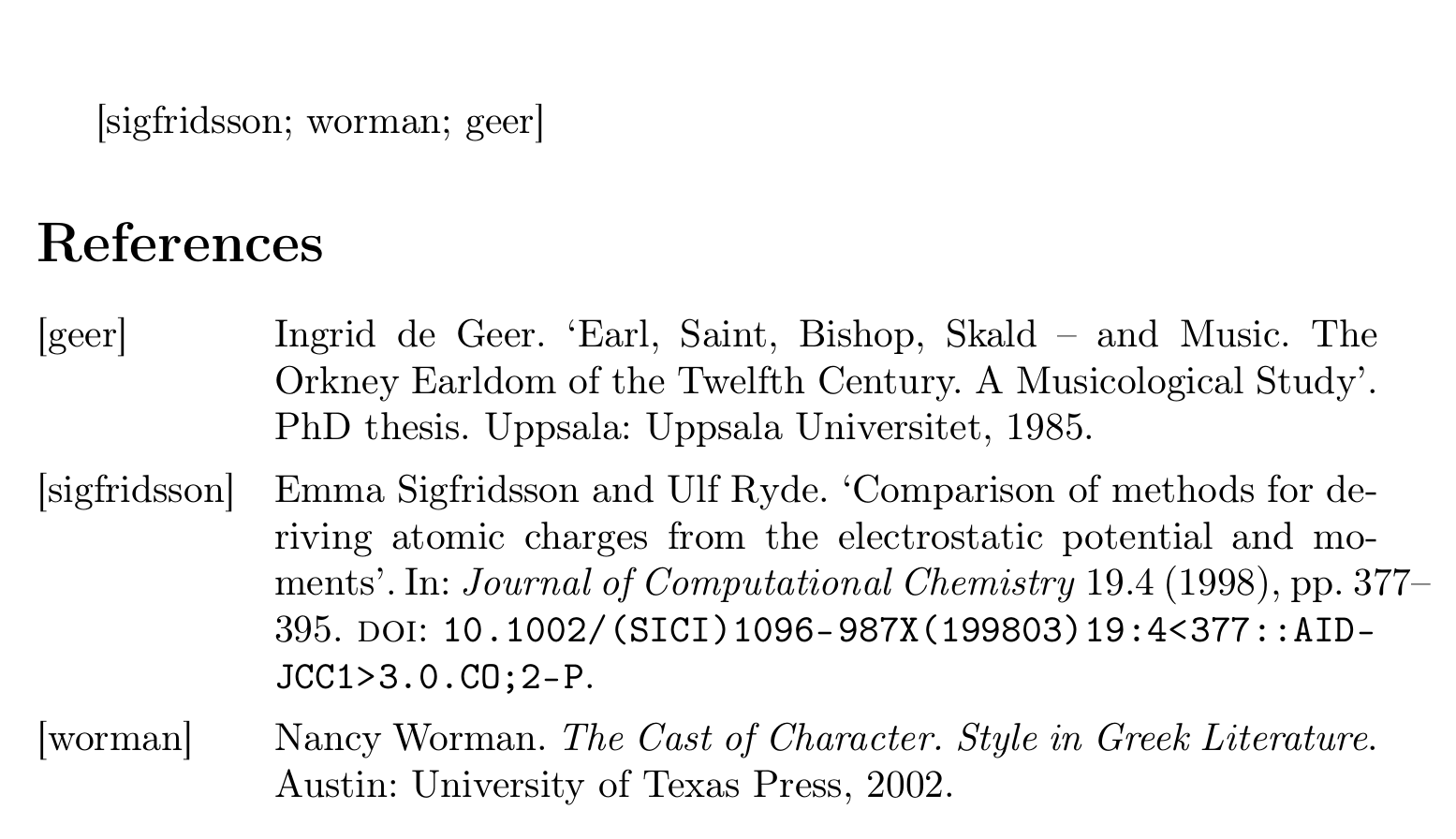 Note that this kind of label generation goes a bit against the idea of biblatex (and BibTeX). Usually most labels should be generated by Biber/BibTeX automatically and only occasionally you may want to overrule something with shorthand. Note that biblatex's label creation is fully customisable, so if you can state your desired labels in algorithmic terms that biblatex understands, that would be the preferred solution. The entry keys should really be purely internal.

The abstract style you refer to in the question is presumably the BibTeX style abstract.bst. BibTeX's .bst styles are completely incompatible with biblatex and can not be used with that package. The biblatex styles debug and draft might also be interesting, though they should usually not be used in normal documents and their output is probably less suitable for what you have in mind.

This is already supported via the pseudo-key citekey:

I will probably add entrykey as an alias for compatibility with sourcemaps in the next version.

0
Customize biblatex: no “a” in citekey

11
biblatex: Preserve capitalisation in inproceedings/booktitle
4
Harvard style bbx, cbx, and lbx
1
How to make biblatex treat the prenote like an author list?
3
Any amsalpha-like style in Biblatex?
10
biblatex filter on arbitrary field
1
Formatting of the BibLaTeX citation key
8
Citation Style Language vs. biblatex (vs. possibly other “citing-systems”?)
1
Customize biblatex key for online entries
1
How to change cite keys with biber / biblatex?