The following are the standard anchors available in TikZ (to the best of my knowledge): 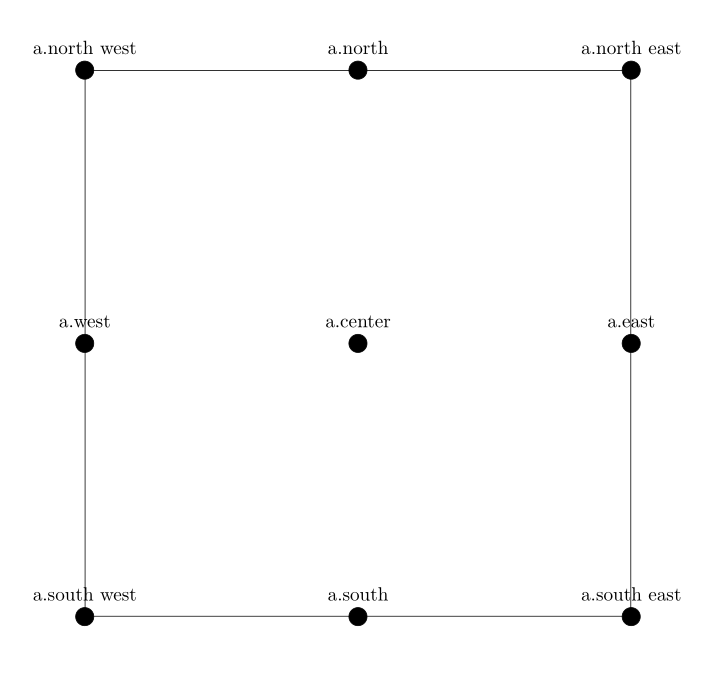 Now, how do I locate the following points:

You can gan get points on a line between two nodes with coordinate[pos=x], where x is a fraction. so

will give you the point in the middle between (a.south west) and (a.south). If you choose x smaller/larger, it will be closer to (a.south west)/(a-mid-sw), and for x=0 or x=1 it will coincide with (a.south west) or (a.south) respectively. Note that x can be negative or larger than 1, in which case the coordinate will be located outside the line connecting the points. 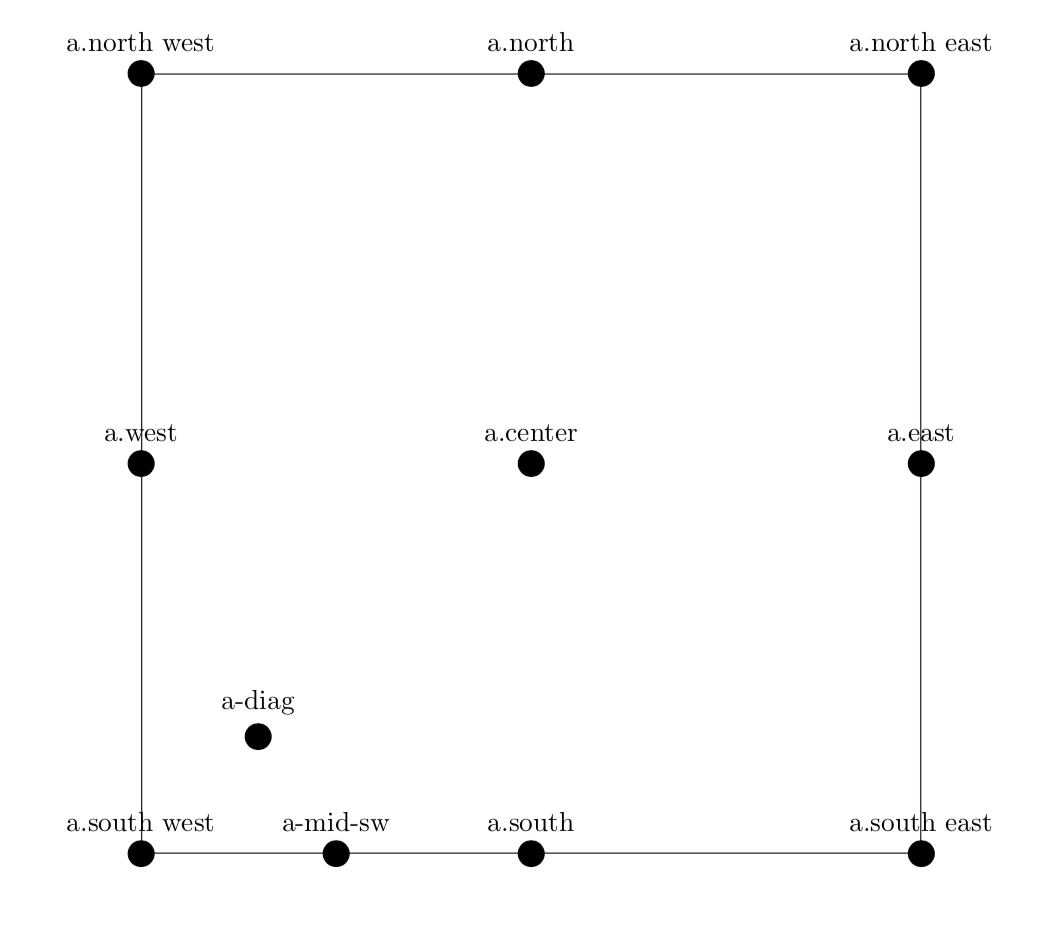 The calc library also allows you to mix coordinates. And you can get points on the boundary using a.angle, where the angle has to be specified in degrees. a.90, for instance, is the same as a.north, a.0 the same as a.east but in general a.45 and a.north east do not have to coincide. (Here they do because the shape is a square.) If you want to have additional anchors, you may define a new shape. 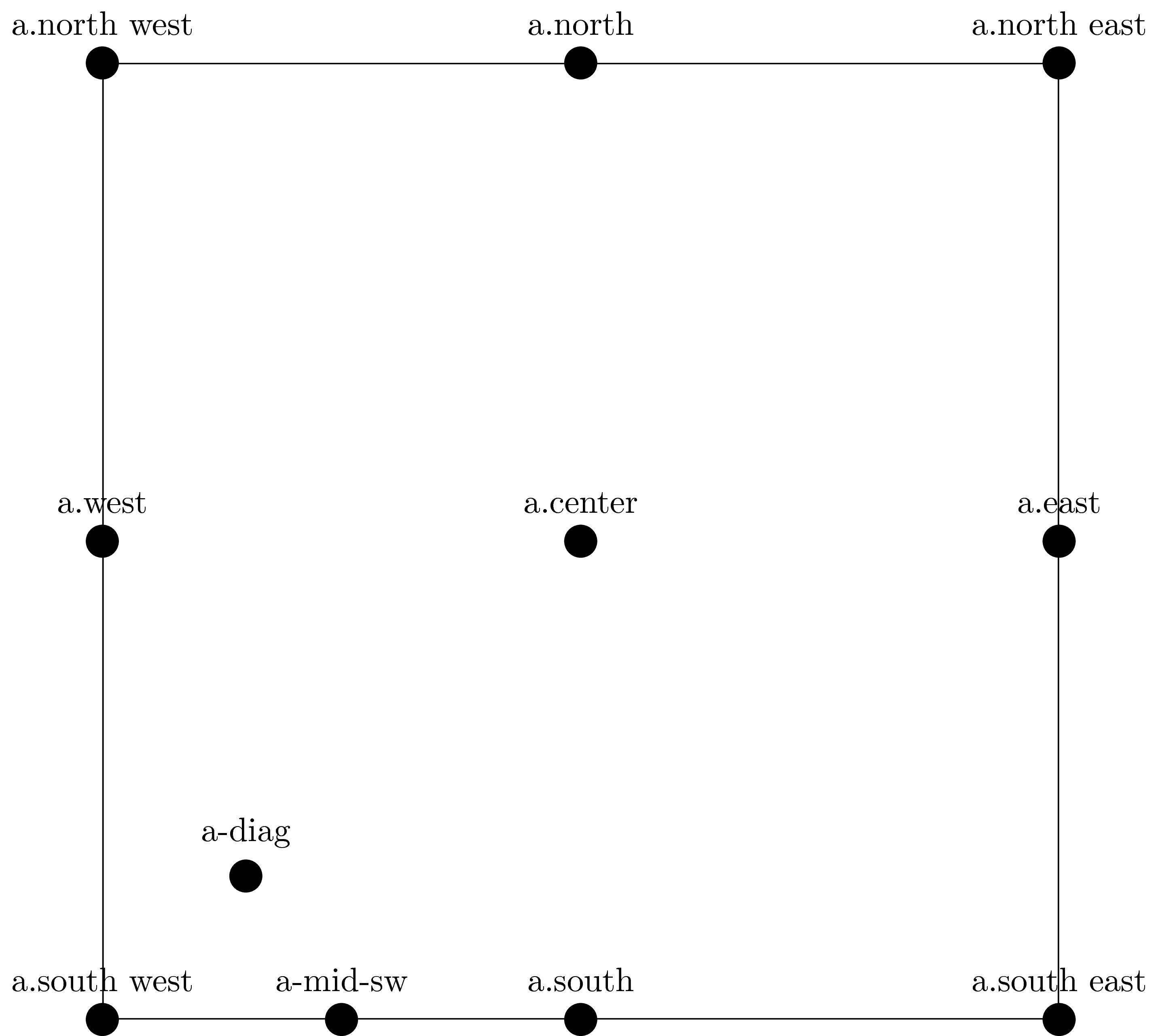 In case you are using this a lot, I suggest using a macro

(the same output as above)

Not the answer you're looking for? Browse other questions tagged tikz-pgf positioning or ask your own question.

13
Rotate a node but not its content: the case of the ellipse decoration
17
How to define the default vertical distance between nodes?
16
Numerical conditional within tikz keys?
16
TikZ: Drawing an arc from an intersection to an intersection
12
Drawing rectilinear curves in Tikz, aka an Etch-a-Sketch drawing
9
Line up nested tikz enviroments or how to get rid of them
0
LaTeX Tikz: Compare two \def arguments
8
How can I draw angled lines in LaTeX to create ruled template for calligraphy?
3
Arrow between BTrees