This typesets fine when amsmath is not loaded, but with amsmath present, the x is typeset to the right of the dot, as if the inner expression is being treated as

This behavior only happens when a closing parentheses (or bracket or brace) is part of the argument to the outer accent.

The best workaround I've been able to find is to use overset for the outer accent instead of the actual accent command (or accentset).

Is this behavior expected/documented anywhere?

I believe that this question was previously asked at amsmath possible bug: \dot over bracketed \dot{x}, but was incorrectly marked as a duplicate of \dot over \vec over : amsmath bug/feature?. The latter question was about the differences in typesetting between dotting a subscripted character and subscripting a dotted character.

This has to do with a long-standing amsmath issue, see Why do arguments to nested \tilde or \breve commands reappear when amsmath is used?

I can offer a workaround. 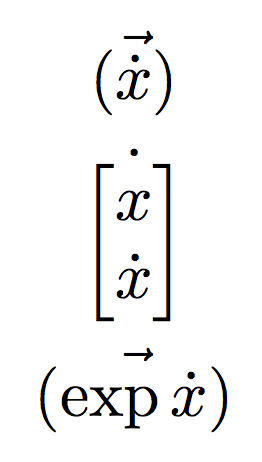 A version that works also with accents:

The following redefines an internal of amsmath. After that the output of your example looks good. I don't know whether this has any possibility of breaking other stuff. I've added every test case egreg used in his answer and the output looks good. It doesn't work with the accents package, though. 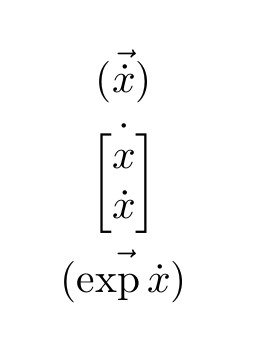 Not the answer you're looking for? Browse other questions tagged amsmath accents or ask your own question.

30
Why do arguments to nested \tilde or \breve commands reappear when amsmath is used?
2
\dot over \vec over : amsmath bug/feature?
2
amsmath possible bug: \dot over bracketed \dot{x}