What's the difference between \mathrm and \operatorname?

I apparently can't see the difference in a compilation (pdflatex) between \mathrm and \operatorname. So, as in the title the question is: is there a difference? Which one is preferable in what occasions?

where it's clear that the second line is typeset wrong. Even if your "operator" requires parentheses after it, it should be \operatorname, as the third summand shows, where a thin space separates the coefficient from the operator.

Another subtle difference is in how some characters are interpreted in \mathrm and in \operatorname. Suppose you have an operator to be called "pre-norm", with a hyphen. Here's the example

and now it's clear what is to be used. Indeed \operatorname (and the same holds for macros defined with \DeclareMathOperator) treats punctuation symbols in a special way; \mathrm, instead, treats them as math symbols.

The argument is written in upright mode but with some additional space before and behind.

It is like math mode (no spaces), but in upright mode. The font size isn't changed.

The following example shows the differences: 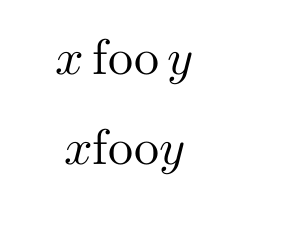 In other LaTeX environments \mathrm{xyz} is useful. In MathJax v 2.0

gave the equivalent output as $ i \sinh x $. MathJax did not recognize \operatorname.

7
Difference between \mathrm, \operatorname and \text?
144
Define additional math operators to be typeset in roman
61
Which command should I use for textual subscripts in math mode?
15
Further questions about mathrm and operatorname: spacing after \colon
9
How to properly typeset E_{\mathrm{k}} in beamer
2
Upright matematical letters in every environment
2
Error using equation*
1
Correctly left align a set of equations
2
Incompatibility of lmodern and fourier?
1
How to insert long subscripts involving characters?
See more linked questions