How to write capital alpha?

Unfortunately, the command \Alpha does not produce capital version of \alpha (as one might expect in analogy with how, say, \Pi produces capital \pi). It so happens that the capital alpha looks rather similar to A, but that doesn't mean that there aren't situations where I would like to use capital alpha in a formula. For instance, suppose I already have \pi which belongs to a set \Pi, and then \alpha comes along and I need a name for the set of its possible values.

What is the best way to write capital alpha?

The obvious first attempt is to just write A. But it's not right - A produces italic A, while Greek letters are by default not italic. Would \mathrm{A} do the trick, or is there some subtle issue I'm not noticing? Is there a package that will save me the work of defining all capital letters by hand?

If you're using LuaLaTeX or XeLaTeX, you can use the unicode-math package. It defines all uppercase Greek letters:

This way has an advantage in that one can change the style of the letters by altering the unicode-math options. For example \usepackage[math-style=ISO]{unicode-math} without any other changes yields:

Also, this way alpha can be copied&pasted from the resulting PDF.

Screenshot from lshort.pdf (The Not So Short Introduction to LaTeX2e): 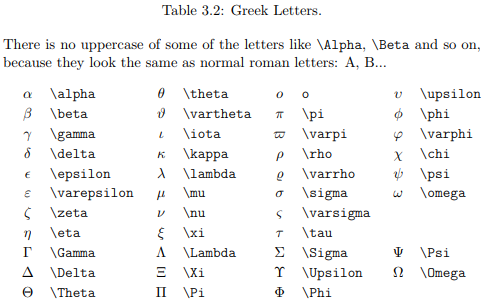 So it is simply \mathrm{A}.

I would recommend unicode-math and Sergei Golovan’s solution if you are able to use it. Fewer and fewer publishers force you to use PDFTeX.

Here is a PDFTeX-compatible solution that produces a Greek Α and Β instead of a Latin A and B:

I chose the names \mupAlpha and \mupBeta, which are compatible with unicode-math, because they always produce a regular-weight, upright letter. It would also be possible to define italic \mitAlpha and bold \mbfAlpha by inserting \itshape or \bfseries. Or you could call it \Alpha.

Another alternative is to declare LGR-encoded symbol alphabets and \DeclareMathSymbol, but be careful you don’t run out of math alphabets, which are a limited resource in the legacy toolchain. There are a number of packages that define Greek math-mode fonts, including upgreek. Both mathastext and isomath have options to load a LGR font for your Greek letters in math mode.

In theory, you could try the alphabeta package to use commands such as \Alpha in either text or math mode, and also insert the Unicode characters in math mode. However, it produces inconsistent results: Α + Β = Γ. In practice, if you want to mix different scripts, you’re much better off with Unicode and the modern toolchain designed for that.

This works with the default Computer Modern fonts. A different font family should be chosen if the font is different (and it should have support for the LGR encoding).

I redefined also \Delta because the correspondence when copying maps the standard \Delta to U+2206 INCREMENT.

You could also avoid the dependency from LGR, but in this case you have to set up a font family in the U encoding.

Below what I get by copy-paste:

If you define \Alpha as \mathrm{A} you just get the same glyph, but upon copying it would be A.

Not the answer you're looking for? Browse other questions tagged fonts greek or ask your own question.

266
What is the "correct" way of embedding text into math mode?