As a follow-up to this solution on defining the default text for a node, how can it be done with the use of a fill color? Note below that specification of a fill color abolishes the node text.

Yet another hack but I think a little bit more robust since it utilizes a legitimate way of putting text inside a node.

My assumption is that the default text would be defined once and there is no need to change it often otherwise you would just put a regular node. So, we can do a little calculation about the default text size and draw the background node accordingly. The text will then fit into the filled rectangle.

If you use \def\mytext{\tiny tiny text},

Although I clearly saw Alan's original answer, I have no memory of it and so when seeing this immediately starting thinking about how I would get some text automatically into a node.

There are several "hooks" in the construction of a node which can be used. Although these hooks are intended for certain purposes, they can be subverted for others, and some aren't really intended for anything but are just "general hooks".

The key macro in the TikZ code is \tikz@do@fig (reminds me of the card game Go Fish!). Looking through this macro, we find the following hooks, together with some other important stuff:

So, we have three hooks provided by the keys font, execute at begin node, and execute at end node. Each has a drawback in that each is separated from the real text by one or more actions:

One other fact is important to note before putting all of this theory into practice. That is the question as to what colour is in effect at the start of all these shenanigans. This is the fill colour. This is quite important to note because it explains why Alan's code is seeming to fail in your example. It isn't. The text is there. It's just that it is rendered with the same colour as the fill. This suggests a simple addition to Alan's solution: set the colour explicitly.

Now, in fact, I'd recommend using execute at begin node instead of font. This is because font=X sets the hook to X, overriding anything already set. Whereas execute at begin node=X appends X to the list of things to be "executed". This makes it easier to manipulate in stages.

The "first method" tries to use the every text node part/.try hook but fails as that's too early. The other methods are the other hooks. An interesting experiment to try (to verify what I said about colours) is to set fill opacity=0,text opacity=1 and to remove the references to \usetextcolour. This shows that the text added by the second and third methods is in the fill colour, as claimed.

Here's the results with the above code: 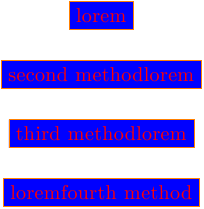 I think that of these methods, I'd go for the execute at end node hook. Whilst that \reset@color stuff worries me a bit, it doesn't worry me all that much so it seems the cleanest hook to get stuff into the node contents automatically.

There is a command in TiKz for doing this : preaction.
To fill a node in place of [fill=black!20] you can use [preaction={fill=black!20}].

The complete code in your case is :

Note 1 : the library calc and the style [node distance=0.5cm,auto] are usless in your example.

47
Is there a tikz style for putting math in all nodes?
21
TikZ style attribute for adding default node text?
8
Using execute at begin node with \phantom and \pgfuseimage in TikZ?
5
Is it possible to refer to node label and reuse it for labeling other nodes in tikz?
3
Matching the text background color in tikz with the background color of a presentation slide
15
Is there a nag package for TikZ?

11
How to define the default vertical distance between nodes?
12
Numerical conditional within tikz keys?
7
Why do I get an extra white page before my TikZ picture?
13
TikZ: Drawing an arc from an intersection to an intersection
12
Drawing rectilinear curves in Tikz, aka an Etch-a-Sketch drawing
9
Line up nested tikz enviroments or how to get rid of them
3
How to draw a square and its diagonals with arrows?
0
LaTeX Tikz: Compare two \def arguments