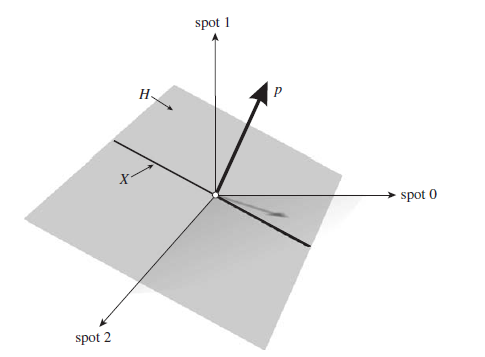 but, since it's the first time I draw a 3d pic, I'm not sure about how to get the plane passing through the line X. The following code shows a first attempt. I tried to use \filldraw, with random points, but I'm sure this is not the best way to do that.

The plane H should intersect X and be perpendicular to p, which is why I defined first p, and then its orthogonal line X. Maybe should I define some coordinates on X , and then define somehow H? I'd like to get the "projection" of p also, as in the figure. That's not a projection in fact, it is there just to highlight that p is a vector of R3. 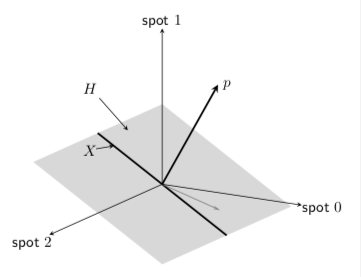 Not the answer you're looking for? Browse other questions tagged tikz-pgf draw tikz-3d tikz-calc or ask your own question.

17
Drawing Axis Grid in 3D with Custom Unit Vectors
6
How can you make animated objects on LaTeX and what programs do you have to use?
6
best way to draw planes in 2d?
3
Animating a 3d plane

1
Drawing a 3D cylinder, and a circle shape on the x---y plane
9
Line up nested tikz enviroments or how to get rid of them
6
Problems with nested TikZpictures
2
Automatically find which nodes are closest, to aid drawing lines within a TikZ matrix
3
Adding some simple labels
2
Drawing some simple orthogonal projections
3
Animating a 3d plane
5
Tikz image within a defined box (& the textpos package)
0
LaTeX Tikz: Compare two \def arguments
8
How can I draw angled lines in LaTeX to create ruled template for calligraphy?