I am using MikTex 2.9 with TexWorks 0.6.3 as editor. As I frequently have to execute a compile sequence

which I currently have to do manually, I would like to put this sequence into some kind of wrapper (batch file?) and call this wrapper from the dropdown menu within TexWorks: 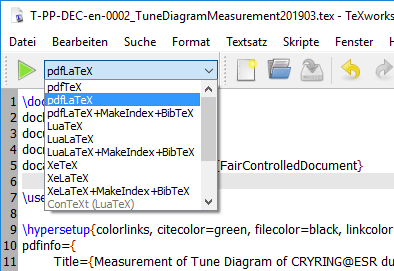 TeXworks keeps its Typesetting Preferences in a plain text file called tools.ini within its configuration folder. NOTE the contents will vary considerably depending on the TeX engine, here is one with MiKTeX entries. 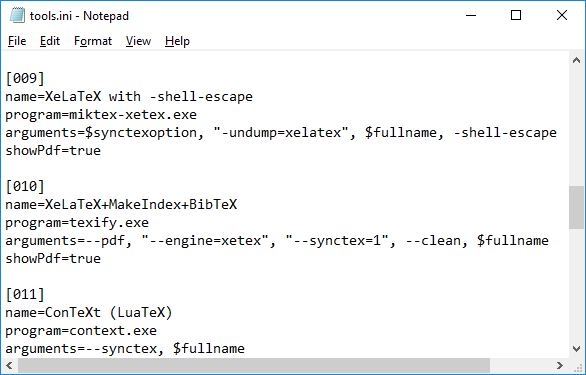 You thus have two options

a) Edit it directly (ensure you have made a backup, DO NOT edit with TeXworks nor whilst TeXworks is running ) HOWEVER for your case this may not help much as it is what some may call a "flat" format see how the chain of commands XeLaTeX+MakeIndex+BibTeX has only one program called texify.exe.

For your use we need to specify a single program to carry out your desired options XeLaTeX -> PdfLatex -> Bibtex -> PdfLatex.

b) Add entries to a new Processing tool definition inside TeXworks Preferences, HOWEVER we have just seen that also is subject to the same limitation of ONE process handler at a time.

So what is the best approach?, well there is latexmk and araura amongst other batch handlers these remove much trial and error.

NOTE I have 18 so the next one to be added is 019 It will differ for you. the -shell-escape should be optional try with and without

MyTool.cmd must be somewhere on "path" , ideally alongside the MiKTeX binaries, but that is not essential if they are also on path.

The pause is only needed on first run to check in console it is found and working, normally there would be more messaging but this is a quick and dirty proof of concept.

Not the answer you're looking for? Browse other questions tagged texworks or ask your own question.

3
How to use char č in \choicemenu
0
How to generate Web content using Miktex?

4
Using XeLaTeX + BiBTeX in TeXWorks
10
AMS-TeX with TeXworks
2
Problems compiling arXiv LaTeX source files
1
How to fix an error when using ko.TeX for typesetting Korean words?
1
TexWorks on Fedora 20
0
Strange fonts when opening tex file
1
It is possible to use ctex in MikTeX/TeXworks?