Compiling the above MWE as written, I get four Gamma,gamma pairs in (respectively) italic, bold, and (2x) italic+bold, which is what I both expect and want. I have need (elsewhere in the document being written) for each of the two packages that are commented out. The good news is that if I uncomment the lmodern package (but leave kpfonts inactive), the output remains unchanged.

In addition to these variants, I've

The questions: Is there a way to load all of these packages and still allow both \textit and \textbf to act on the text Greek letters from textgreek? Alternatively, is there one or more better (e.g., more recent) packages to use instead of one (or more) of those I've described? I realize the latter question is vague, as I haven't specified why I need those packages. The reality is that I'm only one author among five, and I don't know what all the others are doing.

The textgreek package by default uses Computer Modern (the Greek fonts by C. Beccari). But kpfonts sets \bfdefault to b rather than the standard bx, and there are no b/it fonts defined among the Greek cmr fonts.

This explains why you don't get bold italic.

You can fix it by defining the desired font substitutions. 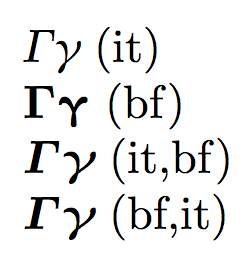 As egreg points out in his answer, the problem stems from \bfdefault being set differently than is the norm. A simple work around is \fontseries{bx}\selectfont. I wrote the macro

which is then used instead of \textbf.

Not the answer you're looking for? Browse other questions tagged fonts packages or ask your own question.