How do I unravel apparent recursion in an edef statement?

The text book that I'm writing requires the ability to dynamically build an alphabetically sorted list. As to not invoke the overhead of high powered, general purpose packages, I have opted instead to write my own, which is both fun and instructive.

Any alphabetic sorting routine must use a sort key to determine the sorted position in the list of the current phrase by comparing its sort key with key of each of other phrases in the list. That routine implements the desired sorting rules such as ignore case, numbers, spaces and punctuation marks for example, as well as strip out any embedded formatting commands which include font and font family changes and accent (diacritical) marks (zap the accent, keep the character). This routine will not only drop characters (spaces and punctuation, etc.), but could directly alter the character itself, such as changing its case for example. One way to accomplish all these tasks is to march through the phrase being sorted character by character, applying these rules to each character individually, and finally build the key by appending the resulting character to the string of already processed characters. It is this last step, appending a character to a string, that is the basis of this question.

I have implemented this appending process using a (global) \edef statement as shown in the \appendChar macro in the following MWE:

Item 2 above is the heart of this question. Even though I have a working solution to the append process, the odd behavior of the \testAppendTwo macro caught my attention and I sought to understand what was happening. I have been unsuccessful. Hence, my question is:

What, exactly, is happening in the \testAppendOne macro? I'm not only interested in a description of what's happening, but also please describe what steps I should take to unravel this behavior for myself.

I suspect that would include using some of the \tracing... macros, but I have not found a usable description of how to use these macros, vs. what they do, and even that is very sketchy. 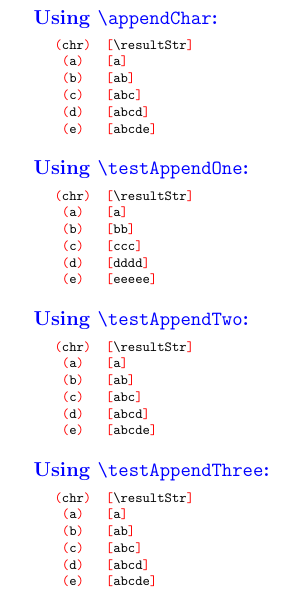 First some general comments about your code:

In LaTeX use \bfseries instead of \bf and \ttfamily instead of \tt. The 2-letter font changing commands are obsolete since LaTeX2ε was released more than 20 years ago.

\global\edef can be shortened to \xdef. However, a macro does not create a group level, so since you are using this all without any grouping layer, the \global assignments are unnecessary here (unless, of course, in your actual code you need it, then ignore this).

One trick for printing command names is that what you achieve with \ttt command you can do with \ttfamily\string\command or, if you define \def\ttt{\ttfamily\string}, then \ttt\command.

One quite important thing is: do not allocate a register more than once. You are just depleting the number of available registers. Allocate the registers once an use them as many times as you need. I moved \newcount\chNum outside the macro definition.

In number assignments TeX already understands \chNum=`#1 to get the numerical value of an alphabetic constant; you don't need (but it doesn't hurt either) \numexpr here. Also the extra pair of parentheses around `#1 in the \numexpr aren't needed here.

Now on to \testAppendOne. The code

is redundant. You don't need to \chardef a character before passing it to \char. As you have yourself done for the backslash with \char92, you can just use the number here:

This will pass \char`<some number which will not change> to \appendChar and you'll get what you want.

But why did \char\the\myCh in \testAppendTwo work? Because the primitive \the will access the value in \myCh. Suppose \myCh is \char"61 (a), then \the\myCh will be "61 (hexadecimal) or 97. Thus the code

is also redundant because \the\myCH will access the number in \myCh, which is \chNum, so you can simplify to:

\testAppendThree is the same, except that \the\chNum will get the value in the \count register instead of the \char. But they are the same, thus the result is the same (and is the same as the modified version of \testAppendTwo :).

Now to the second part how to debug TeX code... Well... You don't really want to enter here. You'll be happier if you don't (just kidding... or am I?).

You code is rather straightforward, so I managed to debug it using only \show and \showthe. They both are used as \show<macro> and \showthe<register>.

\show prints the contents of a macro to the console. For example, if I change your \appendChar macro to:

and run the \testAppendOne TeX will show this in the terminal:

(notice the second line). This showed me why your \testAppendOne was printing the same letter multiple times as I described earlier.

\showthe is similar, but it shows the value of a register. For instance, if you want to see the value of the \chNum register you'd use \showthe\chNum.

These two macros have equivalents which, instead of printing to the console (and the log) print to the PDF. \meaning<macro> will print the definition of the <macro> and \the<register> will print its value.

You can use the \tracingall macro, which tells TeX “give me all you have to show” (and then \tracingnone when you want it to stop), and then your console will be flooded with text. With some practice you'll learn how to read that.

You can also load the trace package and use \traceon/\traceoff, which will hide some steps of the code which will print rather long trace text, like LaTeX's font selection system.

Load \usepackage{unravel} (after all you asked for unravel :) and use \unravel{<code which is keeping you awake at night>}, and the package will show you step-by-step what TeX is doing. It's pretty useful when you are stuck at some nasty piece of code. Beware that this step-by-step is really thorough, so it might take a handful steps to \unravel{\useMacro{\appendChar}} :)

to the output. If you do it on your original code you'd get, for \testAppendOne,

which is not what you want either, is it?

Here's a fixed version of \testAppendOne that appends the real character with a \lowercase trick, namely

Note other fixes: \ttfamily is used instead of \tt and similarly \bfseries for \bf; more important, you should not use \newcount\chNum at each call: you're wasting a count register at each macro call. I also streamlined the initial macros.

Why do I use \lccode`!=\chNum? The character ! has category code 12, so we essentially normalize all category codes to 12, which seems appropriate when dealing with strings. 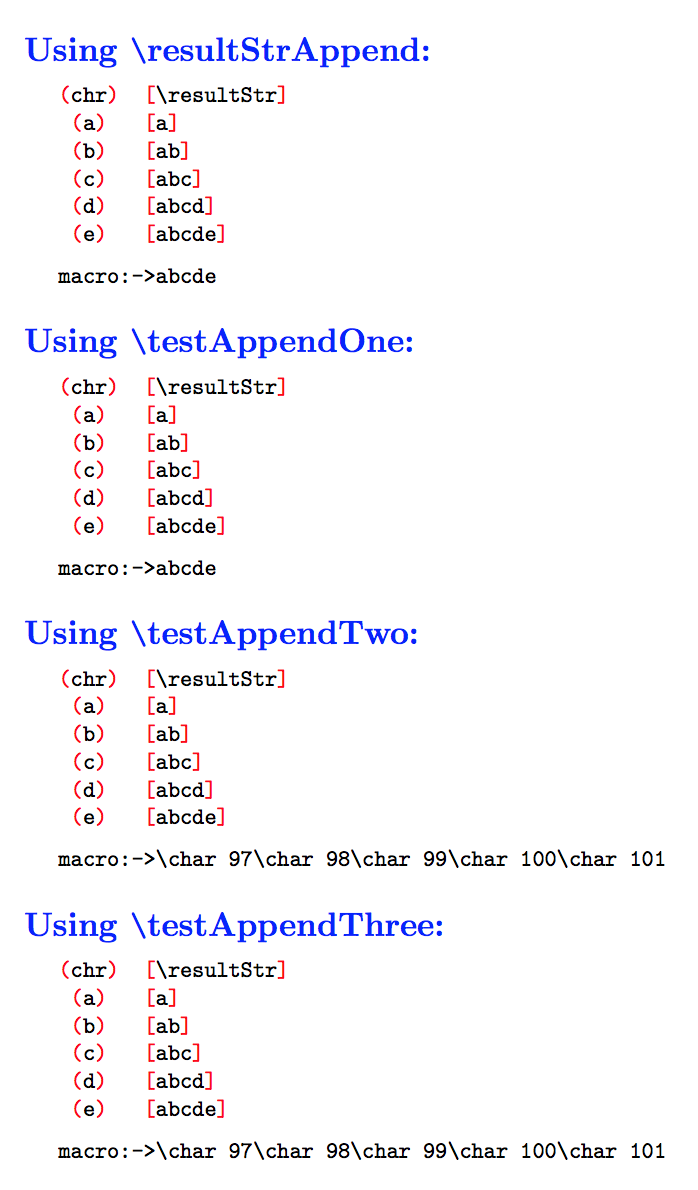 Not the answer you're looking for? Browse other questions tagged macros accents characters strings recursion or ask your own question.