In XY-pic, two parallel arrows passing under a shape are not parallel when they are separated by distance

I want to draw a commutative diagram with xy-pic package similar to the figure shown below. The two arrows from C to D and vice versa should pass under the rectangle ABEF, be separated by a distance, and be horizontal. The problem is that I can not make the segments of these two arrows to be horizontal, rather they are tilted as shown. 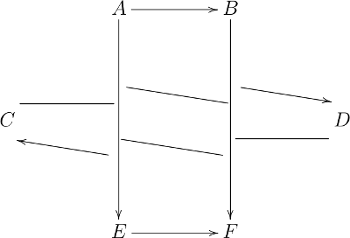 The figure is generated by this code:

When the two arrows are placed exactly on each other (that is, zero distance) both are horizontal and there is no problem.

However, when I make a distance between them, they will not stay horizontal and each segment of arrow tilts. In above code I used 2ex distance between arrows to exaggerate the problem. Though, I originally intend to use smaller distances. How can I fix this? Thanks.

You can also get crossing arrows by putting a small gap in the arrow to be broken by breaking the arrow with the special label \hole. To see a discussion and examples, take a look at the AMS-LaTeX primer "Getting up and running with AMS-LaTeX"amshelp.pdf, at https://ctan.org/tex-archive/info/amslatex/primer?lang=en, section 8.6 (More crossing arrows). For your particular question: 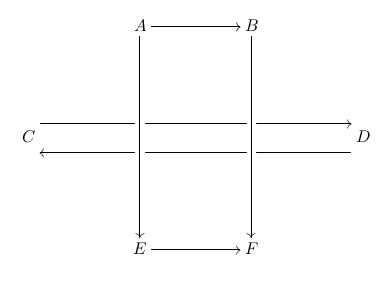 Just for fun: a tikz-cd realization. 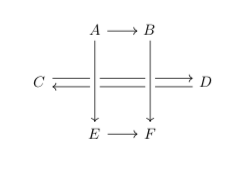 Not the answer you're looking for? Browse other questions tagged xy-pic commutative-diagrams xymatrix or ask your own question.