How can I make a modification to gchords.sty to use actual fret numbers?

I'm using LaTeX to put together a jazz guitar chords book. I've been using gchords.sty (https://kasper.phi-sci.com/gchords/) and it's worked well for me so far except for one thing: you have to specify the fret number relative to the base fret you give for the chord box. For instance, here's an example of a chord I put in:

This is for a chord that you might write as x75335 -- the p{5} in the macro actually represents the seventh fret (base fret of 2 plus 5 frets up from that). That's terribly unintuitive for me as a guitar player, and it means that I have to do mental math for every chord I write out -- figure out a sane base fret and then subtract that from each string in the chord. I would much prefer that the macro work something like this:

where the position of each dot within the chord grid is computed as the specified fret minus the base fret.

Unfortunately, my LaTeX-foo is nowhere near the level of something like this. If this were C or Java, I would just create a wrapper function that calls the chord function with each argument being (arg - base) -- is something like that possible in LaTeX? Would anyone have any idea how to do this?

FWIW, I followed up with the author with a feature request, but I didn't hear back.

I figured this out using LuaLaTex to make a wrapper around the chord macro. 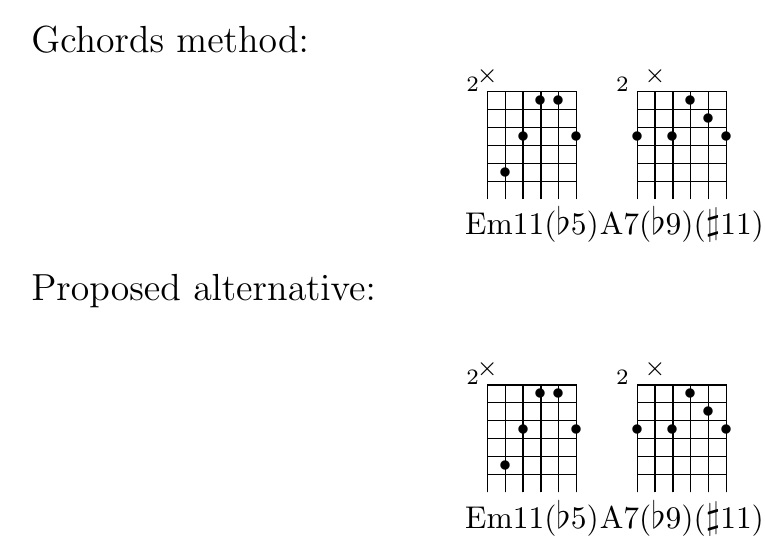 Not the answer you're looking for? Browse other questions tagged macros styles or ask your own question.

6
How to use parameter numbers and \foreach
3
Macro that inserts arguments into an environment
3
Defining command containing pagebreak, and boxes
5
How can I make a custom \item for use in a list?
4
How can I use adjustbox in \sectionmark?
3
LaTeX Utility/Template for Generic Reusable Code
1
Creating mathXxxx type macros for Unicode private use area