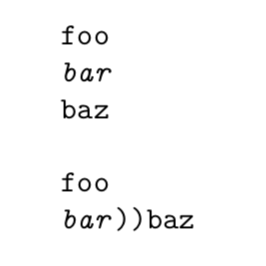 In the first example (let's assume, for simplicity, that you used escapeinside={(:}{:)}), ( is made an active character which looks ahead and checks if it is followed by a : character and, if so, starts the escaping. Inside the escaped code, : is made active and it looks for a ) character.

This problem does not show in your first example because the character made active and the character looked for are different, so it doesn't show the problem.

Here's a proposal to patch that issue and make escapeinside work with whatever character. Beware, though! I didn't test this code extensively (read: I didn't test at all except for the given code) so I don't know if fixing this will break something else. I'd say it won't because it's a very specific bit of code which doesn't seem to be used elsewhere, but the warning is here so you can't blame me afterwards :-)

I modified two definitions, \lst@CDefIt and \lst@IfNextChars@@, which are used with two token delimiters and three-or-more token delimiters, respectively. I changed the token comparison from \ifx to \if, which will ignore the catcode difference and will only compare the character itself, so it should do what you're looking for. I marked the two lines I changed. Adding this code to your preamble should do the trick:

1 If you read carefully, you'll notice that the explanation is faulty because it doesn't make sense for the open code to work and the close code to fail if they do the same thing. Well, it doesn't :) I imagine that the open code is very different from the close code, thus one works and the other doesn't. To be honest debugging listings on Sunday is painful, so I assumed that part of the code works and didn't try too hard finding out why.

Not the answer you're looking for? Browse other questions tagged formatting listings lstlisting or ask your own question.

55
How can I highlight some lines from source code?
8
Closing parenthesis as delimiter not matched when breaklines=true
6
Spacing issue with literate in listings
3
Use textit in listing

9
Two figures side by side with text wrapping
7
How can I avoid the use of default styles when no listings language is set?
4
Can't apply monospaced font to listings (when using pdflatex)
4
lstnewenvironment/lstset : using colors conditionally emph/emphstyle - SAS: (in=_x) versus if x in (1,2)
1
Paragraph spacing in \documentclass{article} with Figure and Listings
1
Background Color for Section Title
0
Reverse Engineering a Cheat Sheet PDF
1
When combining listings and JetBrains Mono * glyphs drop to the baseline (and are too big)