How to get depth and other lengths of a font?

Red line in the output is \baselineskip, the only length in question that I know of. The output image provided here is an edited image in which (red line representing \baselineskip is re-positioned to start at the bottom of the top x) blue lines show the lengths I need to know. 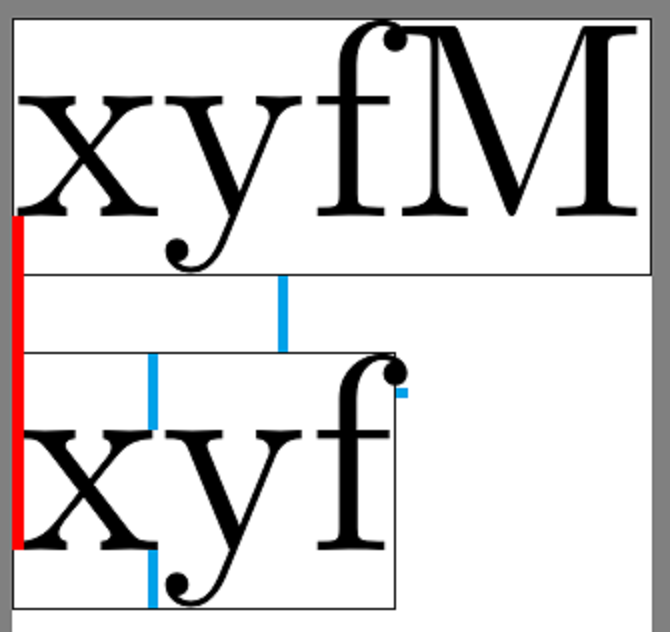 There is no way for TeX to know the exact size of the glyph, TeX only knows the box around them, so the small blue line at the f in the second row can't be determined by TeX alone. The other lengths are determinable, you can measure the size of any box you can typeset (the following is in plain TeX syntax):

With this you can determine the first blue line as:

The blue lines above and below the x in the second row:

e-tex allows you to get the font dimens of each charcter without needing to box it, this shows x and y of the current font

The two distances marked with blue lines depend on the items in both lines, except the blue line next to “f”, which obviously only depends on the letter.

So you can't “know” them in general.

TeX tries to achieve constant distance b between consecutive lines (the value is stored in the parameter \baselineskip). In order to achieve this goal, TeX measures a line (let's call it “line T”) and the next (call it “line B”, by determining the maximum depth d (how much a character extends below the baseline) in line T and the maximum height in line B.

Then TeX computes b − d − h. If this turns out to be positive, then TeX will insert a glob of vertical glue of this amount between the two lines.

However, if b − d − h is less than the value stored in \lineskiplimit (default is 0pt), instead of the computed glue, TeX inserts a fixed amount using the value stored in \lineskip (default 1pt), so that lines never overlap with each other (in the standard setup). By using suitable values of \lineskiplimit and \lineskip one can actually get lines that superimpose to each other, never filling a page (this is exploited in the \ooalign macro).

The usage of \hbox might seem unrealistic, but actually TeX makes \hboxes after splitting a paragraph into lines.

The amount by which a glyph extends outside its bounding box is unknown to TeX and irrelevant for its computations, which only use the bounding box, characterized by height, depth and width.

XeTeX has a primitive to do such measurements, namely \XeTeXglyphbounds; look for it in the XeTeX reference (texdoc xetex).

Not the answer you're looking for? Browse other questions tagged spacing lengths or ask your own question.

5
Fonts design parameters (descendent, cap height, etc): are they available in some register?

311
Lengths and when to use them
7
A version of \smash that interpolates between the true height/depth and the text-height/depth of the current line
4
How to divide two lengths and get a result as an integer?
5
Multicolumn within tabularx: how to get p{'lengths'} right
2
How to set a length to the min of two other lengths?
7
How to link 2 lengths
5
Adding lengths with the plus and minus syntax
1
How can I get all the defined lengths in a document?
1
Problem with lengths and images
0
Align all text in bullet