Putting equations in \intertext to annotate a proof

I'm trying to typeset a proof with Latex. When I do proofs, I like to alternate between a line of text, to explain each step, and the resulting equation. I also like to have the equations align at the =.

I can do this quite easily with begin{align} and \intertext{}. My issue, though, is that I would now like to put an equation into the \intertext. Essentially, it's a side equation which isn't directly part of the proof but is important to get from one step to the next.

Obviously, I could just abandon begin{align} and alternate between text mode and math mode, but then lines of my proof wouldn't be aligned at the =.

Is there some way that I can force \intertext to accept my equation? Otherwise, what do people generally do when they have an equation that's important to the proof but not part of the direct logic?

Thanks in advance for your advice!

This appears to just work, depending on what you want he output to look like, did you get an error message from your use of \intertext?

The code above produces the following output:

You can put $<equation>$ in \intertext, as demonstrated below 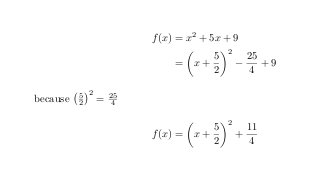 In answer to the question

Otherwise, what do people generally do when they have an equation that's important to the proof but not part of the direct logic?

I suggest using the extension witharrows.

2
Numbering after intertext in align disappears
1
Vertical alignment several labeled equations (can be referenced later) at not-consecutive lines
1
How can I insert text inside the aligned environment?

17
aligning a multiline formula with the bullet of itemize
19
Using \gather and \align together
1
Reliably remove baseline skip between text and math
1
Left align problems
4
Center text between two lines of equation
6
Reduce space between equations and text
2
\resizebox within \begin{align}... \end{align} not working while using \intertext{
2
Left align equation after intertext
1
Aligning two separate equations without \intertext
2
Why does a left curly brace impact the flalign alignment?