How can I easily format this macro easily without having to really mess with it much by hand so I can use tex.print to get it into TeX?

I've tried using [[ ]] and \n after the %'s and various other things but nothing makes TeX happy or it can't find the macro if it does work.

You probably talking about heredoc syntax in Lua, guessing from your comment

Let us assume you are writing a macro that you need to capture a rather long piece of text. You can enclose it as:

If it encloses other square brackets, you need to escape it as:

Here is a full minimal:

This should produce the following output: 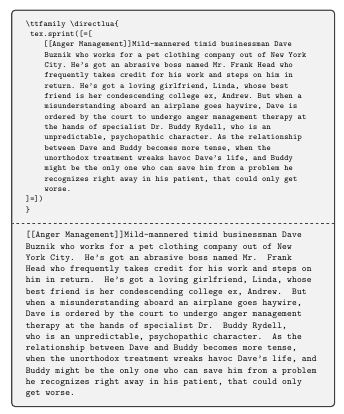 While it is unclear from your question what you want to do, I try to answer it.

with the "meaningless" characters %$~safe

Not the answer you're looking for? Browse other questions tagged luatex lua or ask your own question.

43
What are the advantages of Lua over other scripting languages for a TeX implementation?
33
Reading data from a relational database into a LaTeX table
7
Cannot access arguments in a lua block
9
Get value of macro from lualatex directly
5
Automatically fixing catcode output
8
Search & Replace Script for TeXworks
12
Create a font table for all available characters for a particular font
2
When passing TeX code to Lua and back to TeX, the # symbol doubles
1
Assign Box Register in Lua