The problem is, that if there is a rather long text in a \multicolumn, it is the last column of the table that gets stretched. This problem is known and there are already solutions for that here and here.

I just don't get how I could apply them to my table with aligned columns.

Here is a MWE with vertical bars to better illustrate the widths:

What I would like to see is this alignment, equal column widths and a centered column header: 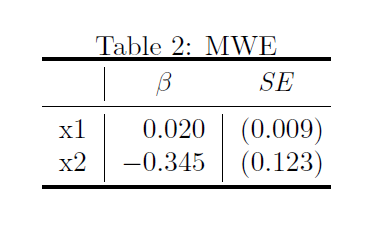 ...but with the variable name as in the first table.

Note: I do not insist on using \dcolumn or any other package. Everything that works (and does not potentially create issues with other basic packages) is fine. 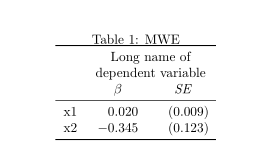 Since you said any packages, here is a solution using cals: 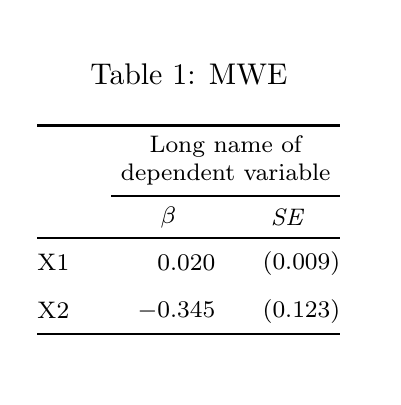 Not the answer you're looking for? Browse other questions tagged tables multicolumn dcolumn or ask your own question.

7
siunitx: protecting lines with text from being formatted as number?
3
LaTeX error in compiling multicolumn table with math columns
0
Centering columns in xtabular with multicolumn and multirow
3
Aligning columns under a \multicolumn
0
Using dcolumn to format regression tables with "." in variable names
3
Lines (rules) and \multicolumn in tabular content built with token lists
10
How to automatically calculate the width of a multicolumn in a table based on the combined widths of the columns that are merged
0
How to remove the space between toprule and bottom rule in tables arranged using tabular environment
1
Inappropriate column size when using \multicolumn