Marginpar appearing on the wrong side (using memoir)

The subject line pretty much says it all: some marginal notes (beginning of the second page) do not appear on the correct side. (The question is: how can I fix this automatically?) Below is a MWE that I got from my code, where I removed as much text as possible (and replace the missing text by a vertical space). I tried to remove some equations and the itemize environment to simplify things further, but could not get the right value of \vspace to still illustrate the problem.

This is a partial answer to my problem ... If I write \strictpagecheck before each \marginpar and if I explictly write \marginparmargin{outer} (which is supposed to be the default), the notes on the second page all get positioned on the correct side. The problem is that the notes that were previously on the wrong side now partly overlap the other ones.

Commenting on an answer which was deleted by its author: I do not want the oneside option as this is going to be printed as a book. Also, I tried sidepar and it definitely does not work: the notes on the first page are on the wrong side and some of the ones on the second overlap. Eventually, I will want to add figures as well as text in the margins.

The problem is intrinsic to LaTeX's marginpar implementation. One possible solution is as follows. This uses pdftex's \pdfsavepos extension, I think other newer engines have similar extensions. Also it would need to be packaged and made a bit more generic (and tested on more than this one input file). But basically the idea is that \marginpar just saves its text in a box (actually two boxes a left and right hand version) then on the next run, LaTeX uses information from \pdfsavepos to align the margin notes at the vertical position of the callout as saved in the aux file. If it would overlap a previous one it is moved down, the positioning is done with shrinkable glue so if the margin column gets too full, the glue will shrink (so notes will move up to allow later ones to fit). 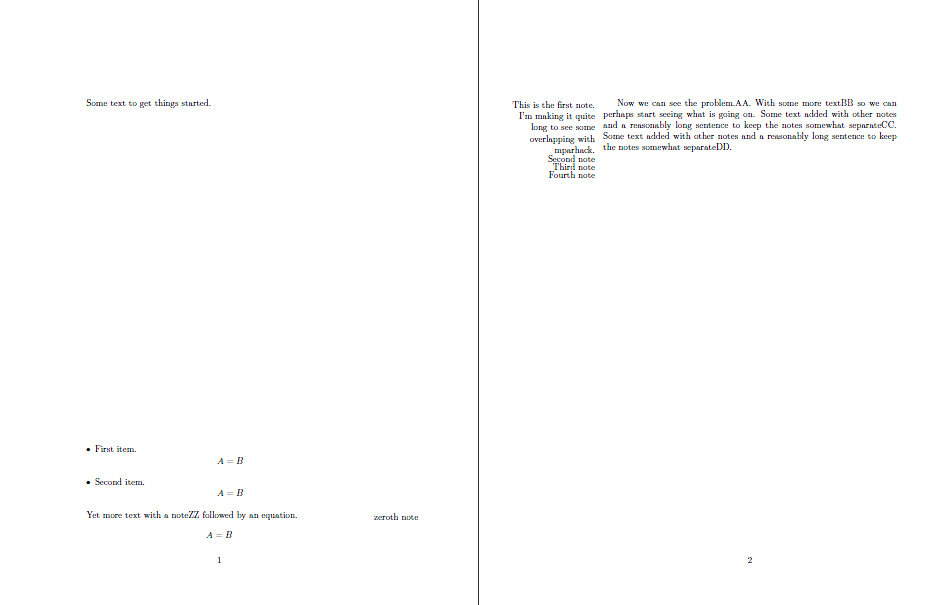 This is an interesting problem, but turns out that is not isolated to memoir, memoir is just better at making it end in the right margin. See this example:

Not the answer you're looking for? Browse other questions tagged positioning page-breaking memoir marginpar or ask your own question.

3
Problem with odd/even margins when environment crosses page boundaries
3
“Underfull \vbox while \output is active”, adjusting stretch/shrink does not make the error vanish
1
On the page-breaking in \marginpar{}

4
Vertical align a marginpar with the *first* line of a 2-line statement
3
why does \hspace{0pt} produce a space at the beginning of the paragraph together with \marginpar?
2
My margin notes are not on the same line as my text
4
Is there a way to prevent marginpars colliding with tabs created using the fancy tabs package
2
marginpar in a macro steal the bullet of itemized list
2
How to correctly change the side that marginpar appears per case?
0
Marginpar notes in the bibliography and vertical position with marginfix
4
top-aligned marginpar on wrong side (even/odd) after pagebreak