What does <recently read> etc. mean in TeX's error message

TeX will encounter an error with the following code:

It will give a message as:

I know this error is simply due to the undefined \test, but what does the <recently read> mean?

And if move \test after \begin{document}, there is no such thing then:

The third example is a \par in the argument:

which gives <to be read again>:

So what does the <recently read>, <to be read again>, <inserted text>, etc. mean?

It's just part of the context, similar to l.2 which indicates line 2.

At any given time, TeX may be reading either from a line in a file, from the terminal or one of the read streams, or from a token list it had constructed earlier (by reading from a file, for example) and saved.

When printing out an error, TeX prints \errorcontextlines pairs of lines of context, similar to a stack trace shown by present-day programming languages. For each of the pairs of lines of context printed, the first part (on the first line) shows what kind of thing is being printed (either a line from a file, or one of a few kinds of token lists), and the rest (partly on the first line and partly on the second line) shows the actual contents. So for example, just as:

means that on line 3, TeX had read up to a_ and had not yet read b (at the time of error), similarly

(the lines must be read in pairs) means that in the <recently read> type of token list, TeX had read up to \test and had not yet read… well, nothing remained to be read. Similarly, the pair of lines

means that in the <to be read again> type of token list, TeX had read up to, well, nothing, and had not yet read \par. (Of course it had already read \par from the input line, which is why this token list was created in the first place.) 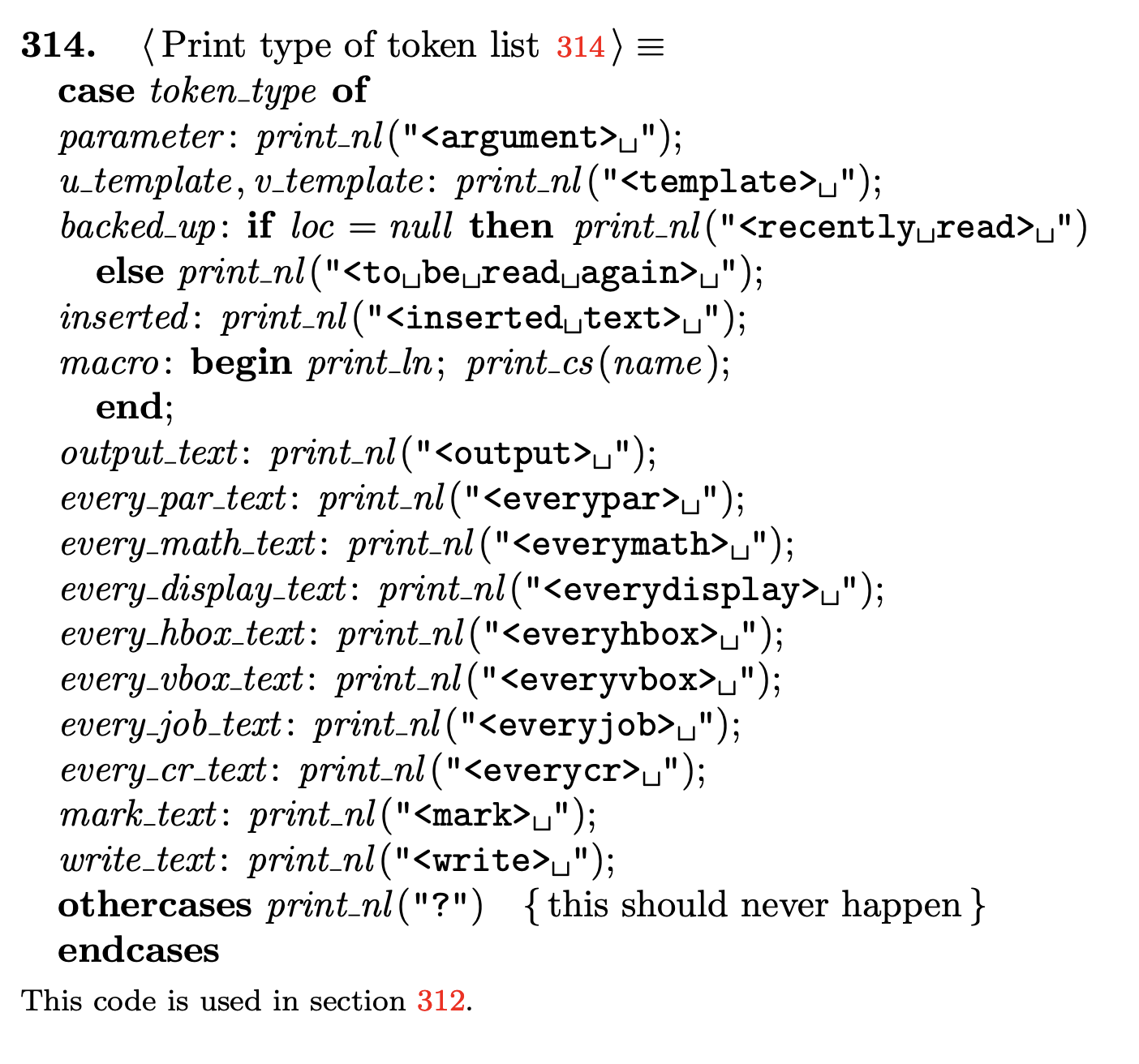 Most of these are self-explanatory. Of the others, backed_up is when TeX realizes it has read more than it needed for whatever it was doing, and puts back the “extra” tokens on the input stack, to be read the next time it needs tokens. This is printed as either <to be read again> or <recently read> depending on whether there's anything left to read in it or not. And inserted is when TeX itself inserts, for error-recovery, some tokens that you didn't type; this is printed as <inserted text>.

For completeness, let's take a more detailed look at each of the examples in the question.

If you had typed

(with a blank line after \documentclass{article}) then you'd only get:

where the first line is the error message, the next pair of lines is the context (where l.3 is the location, with \test having been read and nothing left to read), and ? is the prompt. But as you typed

which has an extra pair of lines of context: at bottom is l.2 \test with nothing remaining (as before), but above that there's also a token list (created by backing-up) that contains \test in it (and this token list has been fully read too). Why? The answer is that you could have typed something like \documentclass{article}[2018/09/03] (see if you can find out where this is documented), so after reading \documentclass{article}, TeX (because of the definition of \documentclass etc) was still looking for a [ when it saw the \test, and backed up because what it saw wasn't [ — it put the \test back on the input stack to be read again, and got done with expanding whatever macros \documentclass{article} entailed. Then it read \test (from the token list this time), and showed you the error.

This is straightforward: TeX reads a, then reads _, which should have been in math mode and cannot be processed in the current (horizontal) mode, so it puts _ back on the input stack to be read again. Then, out of a misplaced desire to help you, it inserts a $ (remember, it has not yet really read and processed _, so effectively this inserted $ is after a and before _), and asks you for confirmation before processing even that $:

Here the first line ! Missing $ inserted. is the error message, the next pair of lines

is the top of the input stack (this is a token list of type inserted, of which nothing has been read and $ remains to be read), after which the next pair of lines

shows that there's next a backed-up token list to be read, after which the next pair of lines

shows that from line 3 of the input file, only b remains to be read. Unfortunately LaTeX's default settings result in only the first pair and last pair of context lines to be shown, which can add to the confusion.

here after showing you the non-ended token-list argument {aa, TeX shows the error message and context:

where again after the error message the first pair of lines shows that the blank line after aa, which is treated as a \par token, has been put back on the input stack to be read next, that it has not yet been read, and similarly that on line 4 nothing has been read and nothing remains.

So you see TeX's error messages are rather well-structured, except that to make sense of the structure you need very good eyesight and to have read the manual very closely even in places where it doesn't explain things clearly. :-)

Not the answer you're looking for? Browse other questions tagged errors tex-core or ask your own question.

3
Enumerate and itemize undefined + captions not working
10
LaTeX Error: File subfigure.sty not found
9
classics package throws weird error message
0
“Undefined Control Sequence” error for several lines
0
Is it possible to add more than one listing code to my frame?
0
Error: File ended while scanning the use of \beamer@modeinline