I originally was going to use the tocloft package, but that seems to have all kinds of clashes with the other stuff I am using to typeset the table of contents and LoT/LoF (specifically I am using the titlesec and titletoc packages). But after working on this for a while they finally recently told me that they want the "List of Objects" to have the exact same formatting as LoF; which makes it seems like I could do some kind of "define this command to be the same as that existing command" type thing to quickly build everything I need for the LoO. Unfortunately I don't know what those commands are. I'm in the process of digging through tocloft to see what I can pull out. Since that package is geared toward making very customizable "List of" options, the code has way more than I need, which makes it a bit difficult to use as a template however.

Any suggestions on how to make a new "List of..." that has identical formatting to LoF, but separate commands to add content to the list? Or where I might read into such a thing, easier than digging through the tocloft package?

Edit:: Based on a comment; to clarify I am using the report document class, although I was hoping to avoid other packages if I can, just because I've already used some to tweak the typesetting of the ToC, LoT, and LoF, and the various packages that deal with these things seem to not play well together.

Edit 2:: I pulled out the relevant code from my cls and put it into a MWE of sorts. It's kind of long because I kept everything in it that manipulates the current ToC/LoT/LoF since part of the problem is avoiding unexpected reformatting of the typesetting when loading other packages. Here is the MWE (to be clear, I would like to add to this a List of Objects that mimics the LoT/LoF). Code is heavily commented for added clarity as well. 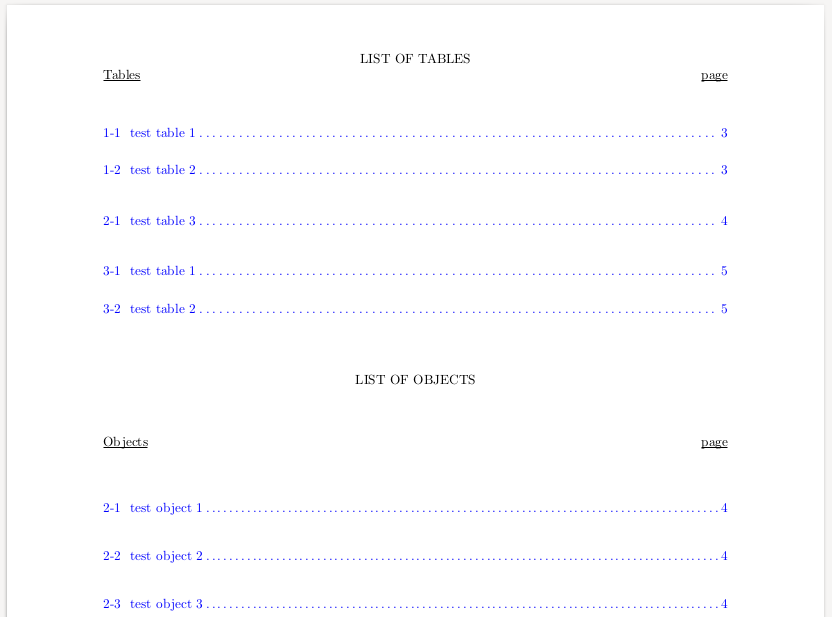 Not the answer you're looking for? Browse other questions tagged macros table-of-contents tocloft or ask your own question.

7
Typesetting listofalgorithms like listoffigures and listoftables using titletoc
0
How to add a custom TOC (automated “Section Break-down”) after each \chapter command?

3
sans serif math in toc/lof/lot with tocloft package
4
Adding dotted lines to the LOF and LOT
5
Page number on the left with book class
4
Aligning the LOT and LOF captions
2
How to show Mini table only sections in a chapter not other chapter?
3
How can i put colon after number in lof and lot pages with tocloft package?
0
Replace “Chapter 1” with “CHAPTER ONE” in chapter header without affecting lof and lot
1
Format fonts for TOC/LOF/LOT with tocloft