I have a tikzcd diagram

I wish to add a symbol which indicates that this is a pullback square. Having looked both here and here, I have found the solution to create my own tikz-cd symbol, and insert that into the diagram.

The code for my symbol is this:

This is basically the bottom and right hand edge of a square.

To add this symbol into the diagram, I am changing the code for the diagram to:

As far as I know, this should be creating an invisible arrow, and putting my symbol at its head. Indeed, something does appear, but its not my what I want:

What should appear is something like this (designed in MSpaint):

Which is the same thing except the symbol with the correct symbol.

What's going wrong? Should I be approaching this in a different way?

Your approach nests tikzpictures. The standard way to avoid that is to use \saveboxes. 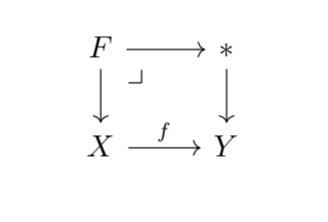 You defined your command with a parameter, which you did not use. Let's assume that there is a need for such parameters. Then \saveboxes are unhandy. Therefore I add an alternative: a path picture with as many things fixed as you can think of. E.g. - is to say that there should not be an arrow, etc. (I understand that it is very unlikely that you want the symbol to be red, this is just to illustrate that parameters work here.) 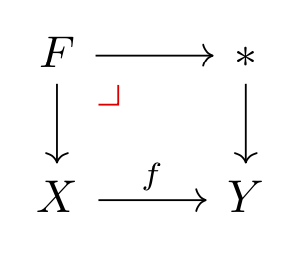 Why don't you simply insert the \lrcorner symbol? 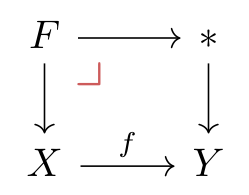 Inside a tikzpicture, along a path, you can put not only node but also pic. 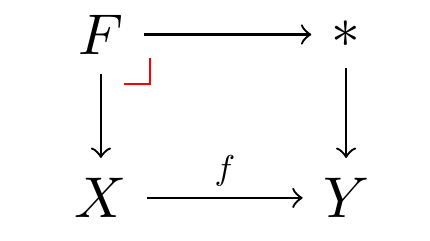 Not the answer you're looking for? Browse other questions tagged tikz-styles tikz-cd or ask your own question.

33
Proper nesting of tikzpicture environments: Reset all PGF values to their defaults
15
Pushouts and pullbacks
1
Label inside tikzcd square