Upside down reversion for a Greek letter

How do I type in LaTeX a Greek letter, say \Omega reflected along baseline? I might have included a picture for what I mean but it should be clear anyway. If not clear: I want to type a Greek letter in a way that if soemone rotates a printed paper by 180 degrees, that one would see an ordinary Greek letter? I wanted to use $$ but these pages tex.stackexchange.com do not correctly interpret them.

The best way to achieve this is with \rotatebox[origin=c]{180}(\someSymbol), from graphicx. It doesn’t rely on any undocumented feature, and it doesn’t need any adjustment with \raisebox, although you might still prefer to add one. 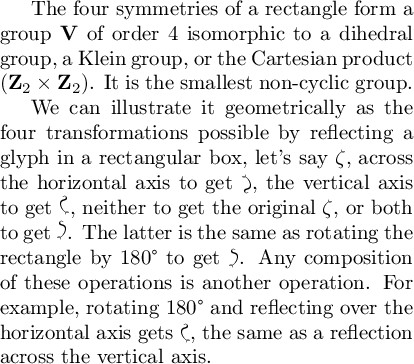 In a real paper, you’d want to declare the symbol with \newcommand rather than insert this code into the running text. If it’s not an “ordinary” math symbol, you might additionally want to wrap it in a command that changes its math class, such as \mathop.

You ask which other letters can be “rotated by amssymb,” like \Omega and \mho. There are a number of such “turned” letters in the letterlike symbols block of Unicode, as well as other mathematical symbols that resemble rotated Greek letters, such as ∇, ∐, ∀ and ∃. (In traditional LaTeX, there are no commands \Alpha or \Epsilon, and the Latin A and E stand in for them.) Barbara Beeton brings up that V looks like an inverted Λ. You can use any of them with unicode-math, either directly, by codepoint, or with a symbolic name that is usually backward-compatible. Since you tagged this question for PDFTeX, in that engine, look them up in “The Comprehensive LaTeX Symbol List.”

Simpler, the amssymb package defines the \mho command for the conductance unit:

Not the answer you're looking for? Browse other questions tagged math-mode rotating greek reflection or ask your own question.