How many times has a label been referenced and which one is the most referenced?

Since lm:1 and lm:2 are both referenced twice, another acceptable list is the following one:

I don't need every possible list, one of them is enough. 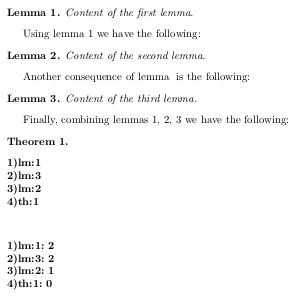 For this kind of application I often find it easier to use an scripting language that parses the text file. Here is an example with unix tools, where your file is named doc.tex

Which you can then sort by piping it to sort -r

The first sed command inserts newline after }, the following command matches the \ref{} pattern, but only once per line, thus why the previous command is used. The subsequent commands are self explanatory.

To ignore labels you can either make the regex more specific, or filter the output above

Not the answer you're looking for? Browse other questions tagged cross-referencing count or ask your own question.

39
A better way to reference theorem-like environments?
27
Graph of dependencies from LaTeX file
26
Show graph of references inside a document
2
LNCS class doesn't like \autoref
2
Rename label and automatically update all references