How to use controls and the +, ++ notation with Tikz?

I want to draw a curved path using Bezier control points, with the notation

Here is what I do:

The second line of code is just to help me understand what I'm doing. This is what it gives: 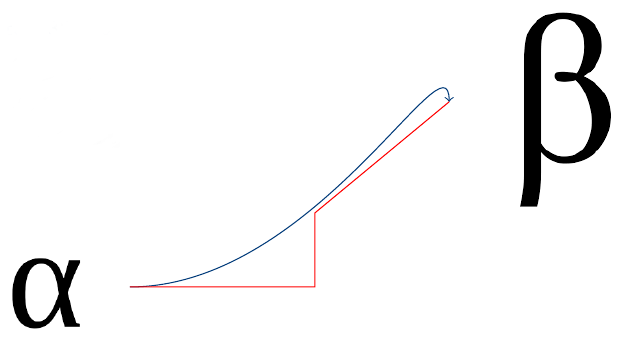 So, it starts from alpha.east and obviously heads towards the point located at 2.5cm on its right, that's ok. But then, from Tikz manual: "Then the curve will, indeed, end at beta.west and the tangent of the curve at point beta.west will go through the second control point."

Here my arrow near beta points downwards, which obviously shows that the tangent of the curve at beta.west does not point to my second control point!

What did I understand wrong?

Thank you daleif for your answer. So, in order to give a working example, I adapted the code given by daleif in the answer below. Here it is:

And here is what it gives:

So, I see my second control point isn't located as I would like, but I still don't understand why. Why isn't it located 1cm above the 1st control point?

Thanks a lot again!

I wasn't looking at the right place in the manual. Here is the explanation (section 13.4.1 of the manual):

BTW: please always provide self contained full minimal examples, not sniplets like this. Self contained examples are easier to test with.

Here is an example showing there the relative control points are. I'm using polar coords here.

13
Line tangent to a a curve (using plot or controls), starting at a point
11
normal coordinate system in tikz using parallel curves
3
Labeling the lengths and angles in a diagram with measurements
12
How to automatically obtain the center of the circle used to draw the arc in TikZ?
2
Animate plot in pgf
5
Tikz: Put control points on tangent of curve point
2
Scale and position Z-Curve using TikZ and the Lindenmayer system
4
Label not typeset in specified location
1
How to draw the tangent vector at one endpoint of a curve
10
Correct way of drawing empty, half-filled and fully filled circles?