Old-style figures: Use in references/brackets (e.g. to equations, bibliography) or not?

In my documents I usually use old-style figures for "non-mathematical" numbers. By this I mean for example dates, page numbers, telephone numbers and the like. For tables, results of equations etc. I generally use lining figures, to distinguish them from the other numbers and to make it easier to recognize the magnitude. I usually do this with the \num{} command provided by siunitx.

Using OSF by default sometimes looks a bit odd, though. Consider for instance the case of putting an OSF between brackets for referencing. Here are two examples: 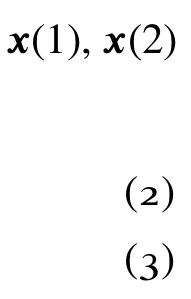 As you can see, lining figures nicely fill up the brackets, they seem to fit into them. The OSF (2) and (3) look odd though, for example there is a dissymmetry in the (3) because it stretches below the bracket and there is a space above it.

This is even more so the case with the [189] in the second example. The 9 even extents until below the bracket!

My specific question is now how to handle this case. Is what I have shown here fine? Should I use OSFs for my main text, but then lining figures in such brackets? If yes, would this not look inconsistent? Should I not use OSFs at all? Or is there another fix?

… This experience proved to be worthwhile, because it taught me that there is a useful and meaningful distinction between text numerals and mathematical numerals. Text numerals are used in contexts like ‘1776’ and ‘Chapter 5’ and ‘41 ways’, where the numbers are essentially part of the English language; mathematical numerals, by contrast, are used in contexts like ‘the greatest common divisor of 12 and 18 is 6’, where the numbers are part of the mathematics.

Equation numbers presented us with one of the most perplexing design questions. Should those numbers be typeset in Euler or cast in Concrete? After several experiments we hit on a solution that must be right, because it seems so obvious in retrospect: We decided to set equation numbers in an “oldstyle” variant of Concrete Roman, using the digits ‘0123456789’. The result – e.g., '(3.14)' – was surprisingly effective.

(Note: the numbers in the above quote are in “oldstyle” in the original; I’m not sure how to get them here)

Not the answer you're looking for? Browse other questions tagged punctuation typography oldstylenums or ask your own question.

22
Should running-text numbers be typeset with math mode?
6
mathpazo old-style figures and eulervm: I want lining figures in math