For typesetting the absolute value of $f(x)$, which of the following gives the proper spacing about "$f(x)$"?

which of the following gives the proper spacing about "$f(x)$"?

First off, you actually left off the following, relevant option:

Second, it so happens that if the "math atom" (to use some TeX jargon) that is placed between the vertical bars is f(x), then all four options produce the exact same output.

Third, does the preceding finding mean that writing

is always typographically ok -- and maybe even best because it's the simplest of the four options? Not at all! To verify this, consider the following MWE (minimum working example): 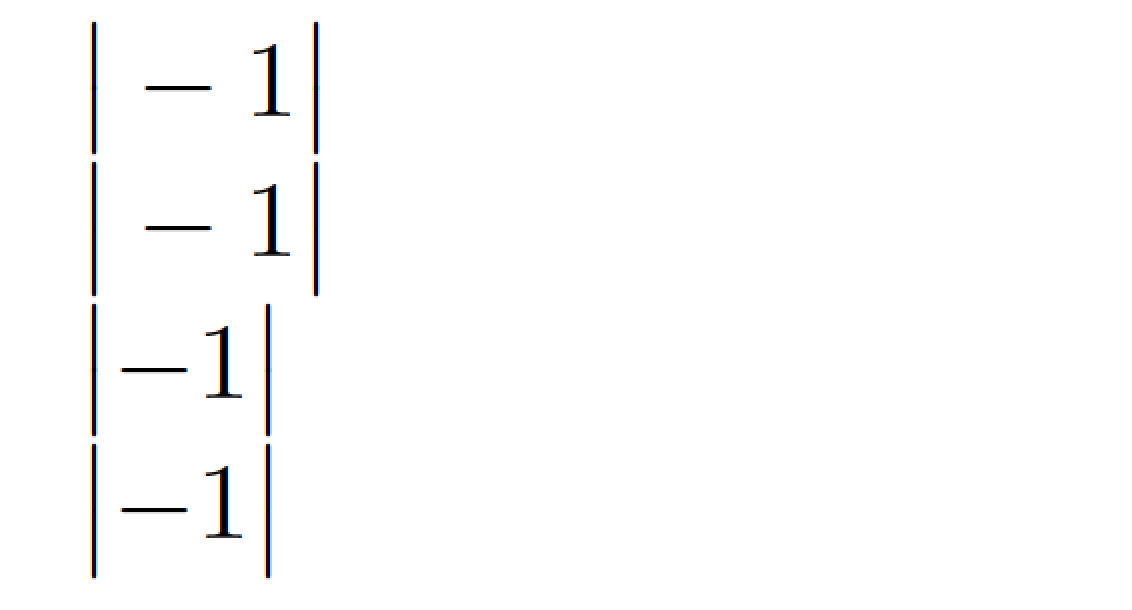 Only the latter two are typographically correct, as they treat the - ("minus") symbols as a unary rather than as a binary operator.

A final remark, prompted by a comment from barbara beeton: For the code examples used here, it's not necessary to increase the size of the vertical bars. However, I'm assuming your real use case involves expressions such as $\bigl\vert -\int_0^1 f(x)\,dx \bigr\vert$.

Differences when \big is used

There's no difference at all between \big|, \big\vert and \big\lvert. The reason is that \big (and also its siblings \Big, \bigg and \Bigg) make an ordinary symbol out of the following delimiter, after forcing it to be a larger size.

How does \big work?

When we say \big<symbol>, the <symbol> can be either a character or a control sequence; if it is a character, it must have a positive \delcode; if it is a control sequence it must be a macro whose meaning starts with \delimiter followed by a 27 bit number. These are the same requirements for something following \left and not by chance: indeed \big<symbol> is realized by doing something like

where the <empty box> has suitable vertical size to trigger \left choosing a larger variant. (I'm hiding some detail, as usual.) The braces around the construction make the object an ordinary symbol.

What's the difference between \vert and |?

None, as far as the behavior in math formulas is concerned. They behave as ordinary symbols.

What's the difference between \lvert and \vert?

This is a big one! \lvert is considered as an opening atom; its companion \rvert is a closing atom. The commands have been introduced by amsmath (not by the LaTeX kernel), in order to avoid bad spacing: just considering the output of

clears up the matter. In the first formula, using | instead of \vert or conversely produces the same output.

How does \bigl work?

With \bigl<symbol>, TeX will do

that is, the same as before, but with \mathopen acting on the object, which makes it to be spaced correctly. Again it's immaterial whether we use

The action of \bigr is similar: with \bigr<symbol> we obtain

which is appropriate for a closing atom.

If we do \bigm<symbol> we obtain

which is appropriate for the <symbol> used as a relation symbol. For instance, it would be correct to use

in case we need larger fences. Again, \bigm|, \bigm\vert, \bigm\lvert or even \bigm\rvert are exactly the same.

Should I use \lvert and \rvert after \bigl and \bigr?

Yes, we should. But laziness has its merits, so the simpler \bigl| is handier.

Is \big| banned from use?

Not at all! If we want a larger vertical bar to denote restriction of a function or evaluation at a point, we can certainly use \big|, say for

(in the second case, perhaps \Big| would be better, but it's a matter of taste).

Depending on whether you wish to get long bars or standard bars, use $\bigl\lvert f(x) \bigr\rvert$ or simply $\lvert f(x) \rvert$, respectively.

154
\mid, | (vertical bar), \vert, \lvert, \rvert, \divides
48
Difference between \big[ and \bigl[
13
Is there a command for large middle delimiters consistent with \bigl and \bigr?
34
Why use the control sequences \bigl, \biggl, \bigr or \biggr, as I can always use \big or \bigg?
5
Why is the spacing changed through {}?
4
\bigl( \bigr) in inline mode and in align environment
8
Using \big| and \right| versus \bigr\rvert and \right\rvert
1
Shortcuts for \lvert and \rvert? (with amsmath)