My document has numbered assumptions 1.1, 1.2, etc. At some point in the text, I would like to define a variant of a previously-stated assumption, say Assumption 1.2, and have its counter display as 1.2b.

I'm trying to achieve that by defining a new assumptionb environment that redefines \theassumption by grabbing the correct assumption counter value using a label passed as argument, and appending a b to it.

The result is that the variant assumption is displayed as "Assumption 1.2b" regardless of what label I pass as argument to assumptionb. Also a ".3" is displayed before the environment: 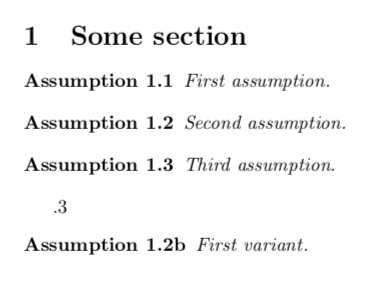 The ".3" presumably refers to the argument of assumptionb but I don't see why it's being displayed.

I would like the assumptionb environment to be friendly with \usepackage[nameinlink]{cleveref} so that \cref{asm:2b} displays as "Assumption 1.2b" all hyperlinked.

You can manage it in a much simpler way: Just redefine \theassumption and nullify the effect of \refstepcounter to avoid incrementing the original assumption counter. 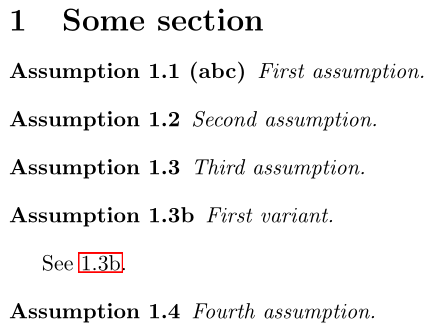 Not the answer you're looking for? Browse other questions tagged environments counters or ask your own question.