Macro that knows it is at the end of a section?

In Is it a bad idea to use \begin{section} ... \end{section} in LaTeX?, Jan Hlavacek says:

Of course it is typically possible to recognize an end of a section, but there is actually a number of ways how a section can end: start of another section, start of the next chapter or part, start of \endmatter, bibliograpy, index, etc, or the end of document.

How would I go about writing a macro that recognizes when it is at the end of a section?

I'd like it to work properly in \afterpage so that I can fix some of the issues in my answer to Section reminders at the top of each page? I believe this means that it'll have to use marks to detect where it is in relation to a sectioning command, but I don't know enough about LaTeX to be certain.

As requested the problem can't be resolved (with input similar to the example). TeX is sequentially working and when it executes \printendedsections in running text there is no way for TeX to know if the next thing that comes up is more text, some heading or ...

Even with a multi-pass solution it is next to impossible to determine, at least not if you do not additionally modify the heading commands as well, as one would need to determine what (if anything) is between \printendedsections and the next heading command.

Ignoring, for the moment, the additional request to determine if a section starts on the top of the page, the problem of automatically outputting text when a section level ends can be accomplished in a number of ways. Here is one that does everything automagically:

We hook into \@startsection which is the standard LaTeX interface for producing headings (other than chapter). We know that if this command is called a heading with "level number" #2 is being generated (a section is 1, a subsection 2 ...).

There is only one catch: LaTeX is lazy and when it starts a new heading it only resets the next heading level to zero but not all higher heading levels (as this will later on recursively happen anyway). However, for us this is a problem because it means that after "subsubsection 1.2.1" its value will stay at 1, thus messing up the output when "subsection 2.1" is processed. Therefore we explicitly have to ensure that the subsubsection counter is reset when we process a section (you can try it out by commenting the \setcounter line out).

Finally we also need to end everything at the end of the document. This is done by pretending that this place acts like another section, i.e., we run \outputsectionends{1} there.

If you run this you will get: 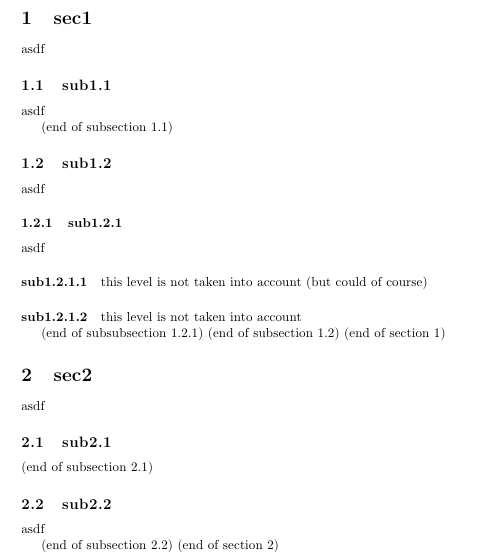 Of course there are several improvements possible including, e.g., how the resulting text is formatted (which for now is simply as a paragraph with indentation by itself).

Detecting sections on the top of the page

Obviously this doesn't work with \afterpage as it all happens behind the scene. However afterpage isn't the right tool anyway here, as it drops in something in an asyncronous way after the main galley has already been processed and this isn't going to help.

The approach that I would use instead is adding labels before and after the breakpoint that is added by the heading. Thus if both end up on the same page, then no break was taken at this point and if they end up on different pages, then the break happened directly in front of the heading. In that case \outputsectionends could change its behavior as necessary (obviously that would result in multiple runs before the document stabilizes, especially if the amount of text generated changes a lot depending on the situation). I'm not too sure though what is wanted by the OP so I'm not going to flesh this out.

Providing this solution for parts or chapter

In a comment it was asked if this solution would work also \part or \chapter. The answer is yes and no. Not out of the box with the code above. It needs extending the code in two ways

In a comment it was asked what I mean by adding labels before and after the break. What \@startsection uses to generate the possible breakpoint is:

and the commands \addpenalty and \addvspace are a little tricky so that we can't simply add labels before and after. Why? Because they look backwards to detect if there is a vertical space in front and if so move the space after the penalty or combine it with the additionally requested space (in case of \addvspace). So if we put a label in front of \addpenalty it means that any previous space is hidden by it. Therefore we need to provide our own version that mimics \addpenalty and also adds a label:

Adding the second label after the \addvspace is fine as that will be followed by the heading title. There is of course a lot more to do, the labels need to be different for each instance (for example by using a counter that is incremented) and one has to write a comparison for the page values they generate. And then one has to write some code that actually makes use of this information that the heading appears right at the top (hand waving :-)

Not the answer you're looking for? Browse other questions tagged macros sectioning or ask your own question.

2
Is there an end equivalent to AtBeginPart in beamer?
63
Is it a bad idea to use \begin{section} ... \end{section} in LaTeX?
24
Breadcrumb hyperlink header
9
Section should automatically start new page if the whole section does not fit on current page
9
Section reminders at the top of each page?
5
rightmark shows next subsection, not the active one on top of side
2
Detect section on top of page
1
How to create a compact glossary / dictionary using words in bold as keys and appending the list at the end of the page, section or chapter?

6
subsection vs Theorem
1
Page breaks inside titlesec section headings
1
Put count of pages in each section in the table of contents
2
How to use several sectioning trees (Chapter, Section....) in parallel and in the same document
0
Why does the subsection appear in the header before it does in the document?
1
Bold subsection headings in svjour3
2
Detect section on top of page