How to pass a variable to a command in LaTeX?

I am trying to make a tax calculator for an invoice template and the idea is to pass the variable subcost to the command \taxcalc.

The problem is, no matter what I try to do to subcost, the compiler keeps complaining:

It works perfectly for the following:

Can anyone help me? I've been googling for hours now in order to find how to correctly pass variables to functions in this language but no matter what I try, it only works if I hardcode a number.

subcost is defined as follows:

Your approach works. You can declare a variable, or parameterless function, with pgf which you seem to be using. In order to be able to redefine the function, you need the starred version, \pgfmathdeclarefunction*. This allows you to define a variable and assign it a value which you can use in any expression that you parse with pgf. For your convenience, I packed the \pgfmathdeclarefunction* stuff in a macro \SetPgfVariable. 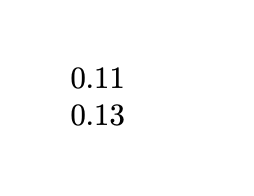 Seems with your first snippet the problem is:

\taxcalc's first and second argument must be numbers or calls to defined PGF-math-functions—i.e., things which can be used for calculations with PGF-math-things.

But by \vatTotal as first argument the sequence subcost is passed to \taxcalc. That sequence does neither denote such a number nor denote a call to such a defined PGF-math-function.

PGF-math-things cannot/do not "know" that the sequence subcost denotes the name of a LaTeX-counter whose value is to be obtained.

Another question is: Why \bf twice, opening up two nested local scopes? Seems one local scope and one \bf is sufficient. :-)

You can modify \vatTotal to make sure that the value of the subcost-LaTeX-counter gets expanded "into" \taxcalc's first argument before \taxcalc gets carried out. This way at the time of carrying out \taxcalc the first argument of \taxcalc will not be a character-sequence denoting the name of a LaTeX-counter but will be a number and thus something that is "understood" by the PGF-math-things.

Your second snippet works because here the sequence subcost is wrapped into \arabic{...} by the routine \total while the argument of \arabic must denote the name of a LaTeX-counter.
In other words: Here \total takes into account that subcost denotes the name of a LaTeX-counter by applying \arabic to that phrase for obtaining a number which FP-math-stuff can calculate with.

The routine \taxcalc from your first snippet processes two arguments whereof each must denote a number or a call to a defined PGF-math-function which in turn delivers a number.

The name of a LaTeX-counter neither denotes such a number nor denotes the call to a defined PGF-math-function.
Therefore you need steps for obtaining the value/number from the name of the LaTeX-counter.

The routine \total processes one argument which must denote the name of a LaTeX-counter.

\total internally applies \arabic for obtaining a number from that which FP-math-thingies can use for calculating.

Not the answer you're looking for? Browse other questions tagged macros pgfmath variable or ask your own question.