How is text indented and glued within TikZ node contents?

This is my MWE:

The difference is obvious, a and b are not aligned in the first node. Apparently, the \phantom{...} is not typeset using the \ttfamily, hence it's size is different. I could have used the incantation font=\ttfamily, which would work just as fine as node font=\ttfamily.

The PGF manual only mentions this a bit vaguely:

Naturally, you can just use a font command like \small or \rm at the beginning of a node. However, the following two options make it easier to set the font used in nodes on a general basis.

The keyword node is typically followed by some options and then some text between curly braces. This text is put inside a normal TEX box (if the node specification directly follows a coordinate, which is usually the case, TikZ is able to perform some magic so that it is even possible to use verbatim text inside the boxes)

Apparently I cannot "just use a font command". Why? Is this connected to the aforementioned "magic" in any way? Also, what is a "normal TeX box"? I am aware of \parbox, \mbox and \minipage, and they all behave a little bit differently with respect to indentation and similar things.

That's because if you omit text width TikZ will try to figure out the text width for you by splitting lines at \\ and packing them into an \halign. That is also documented under /tikz/align in the PGF manual.

Essentially these two are equivalent: 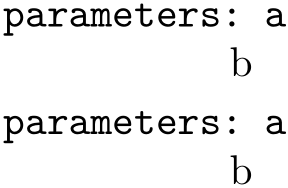 Not the answer you're looking for? Browse other questions tagged tikz-pgf tikz-styles tikz-node or ask your own question.

16
Numerical conditional within tikz keys?
1
How to add arrow from text to node?
5
Annotating picture with tikz and positioning
9
Line up nested tikz enviroments or how to get rid of them
5
Add text under tikz rectangle
3
How to draw rectangular boxes with TikZ?
4
Tikz Node Text Formatting Problems
3
Document header with tikz