Question: Is there an environment similar to the comment environment that suppresses text and space but can be called using inline commands?

I'm trying to develop a better way to type my solutions into my homework sets. Ideally, I'd like to have something in the preamble that I comment/uncomment to include/exclude solutions. I have a MWE below to demonstrate the type of thing I'm trying to implement, but of course, in it's current form, it doesn't work.

I know of one way to partially succeed in what I'm trying to do, and that is to define the new command with an optional argument. The issue I have with this is that when I have a problem with multiple parts that is quite long, it may take a non-trivial amount of time to actually locate the relevant part of the code (for reference, I'm using WinEdt paired with Sumatra, so I can double click the pdf in Sumatra and it takes me to that part of the code; with an optional argument, though, I'm always taken to the very end). A MWE demonstrating this method is below.

I think the package scontents is adapted to this job, if I understood your question and the example file: 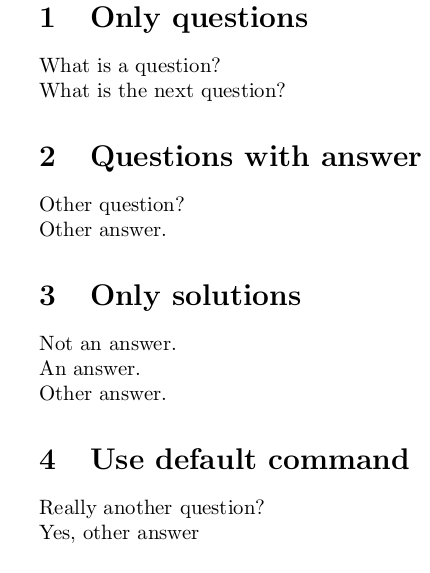 If we switch to print-env=true 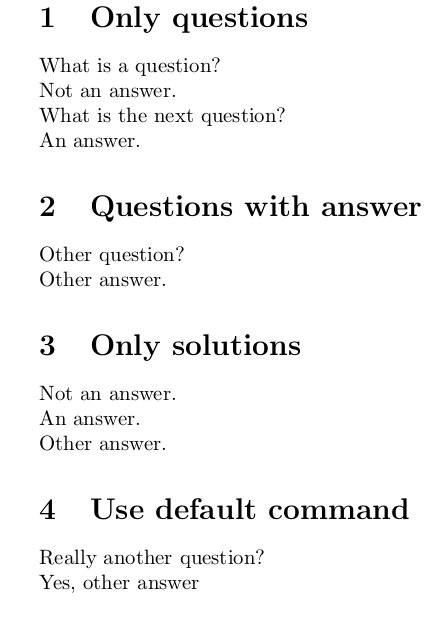 The truth is you can play with the package options, using the command \setupsc or with the local options [print-env=<true|false>] and [print-cmd=<true|false>], the current version does not (yet) allow you to create a custom command, only environments, I recommend you read the documentation. (Credit to @Werner for example)

You can define \soln to grab everything up to \solnend and then either set it (\showsolutions) or not (\nosolutions).

To understand the definition of \soln, you'll have to understand how \def works. \def has the following syntax (from p 203 of The TeX Book):

Definitions have the general form

How does TeX determine where an argument stops, you ask. Answer: There are two cases. A delimited parameter is followed in the <parameter text> by one or more non-parameter tokens, before reaching the end of the parameter text or the next parameter token; in this case the corresponding argument is the shortest (possibly empty) sequence of tokens with properly nested {...} groups that is followed in the input by this particular list of non-parameter tokens. (Category codes and character codes must both match, and control sequence names must be the same.) An undelimited parameter is followed immediately in the <parameter text> by a parameter token, or it occurs at the very end of the parameter text; in this case the corresponding argument is the next non-blank token, unless that token is '{', when the argument will be the entire {...} group that follows. In both cases, if the argument found in this way has the form '{<nested tokens>}', where <nested tokens> stands for any sequence of tokens that is properly nested with respect to braces, the outermost braces enclosing the argument are removed and the <nested tokens> will remain.

The definition of \soln (under \showsolutions) uses a delimited parameter in the <parameter text>:

Under \nosolutions, the same happens (a delimited parameter in the <parameter text>), but whatever captured is never set (no #1 within the <replacement text>).

We use a \long \definition, because the argument #1 - whatever is between \soln and \solnend - could contain paragraphs of text (otherwise a regular \def would suffice).

Also, since the definition of \soln is made within another macro (\showsolutions and/or \nosolutions), doubling of the # is necessary (see the answer to Exercise 20.5 on p 329 within the TeX Book).

The following basic example should work

If instead of environments and you want to, absolutely, use macros to turn on and off commenting, there's some historical code that you can look at that does the sort of thing you want.