One of my favorite things in Org mode in Emacs or Markdown is that I can quickly build lists by just doing:

and it would automatically recognize that as an actual list.

In LaTeX, I often find myself having to type:

which is unfortunately a lot more typing. This isn't a blocker obviously, but it makes it more difficult to use LaTeX to add / track notes with the power of still harnessing everything else it has to offer.

Moreover, if I copy a list from another document (e.g. Org / markdown or even other formats), chances are that they also use - (or a similar single character) to designate each item in the list.

Is there a way in LaTeX to build "itemize-like" "lists" where each item is defined with a similarly single character (knowing that it's either placed at the beginning of a line or preceded with only space in the line)?

In case it helps others, often times IDEs have macros to help with typing, and that's actually my case - I'm in VSCode, so I can use snippets (~ IDE macros) like bit in Latex-Workshop which expands the word bit to an itemize environment. However that still requires me to do a lot of typing, and I can't even convert (copy) existing lists either (see this issue I reported).

In other words, IDE macros alone could theoretically help, but it would be nice if one could easily do this in LaTeX itself.

Just for interesting. You are asking for thinks which are default in OpTeX format:

Found a good solution for this problem using the markdown package. As long as you don't need to use other LaTeX commands inside the list, it works great. 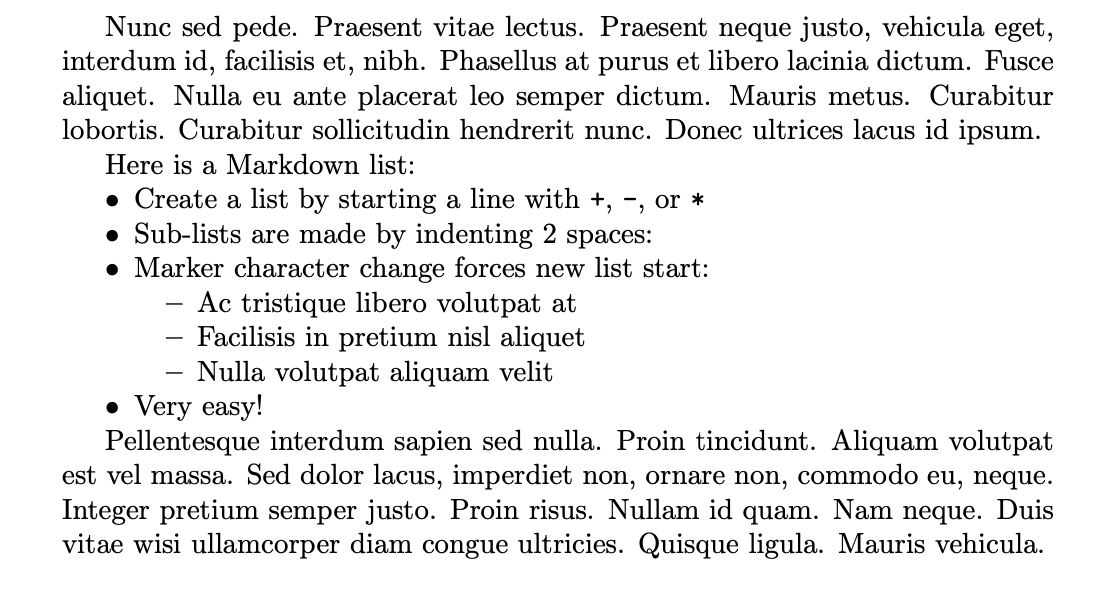 As noted in the comments, the easylist package can be used here. This package also supports itemize style unnumbered lists. 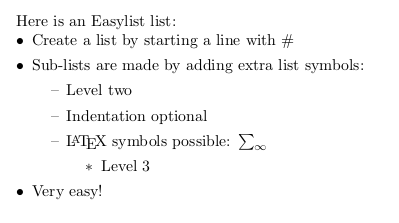 Not the answer you're looking for? Browse other questions tagged macros lists visual-studio-code or ask your own question.

16
Reduce size of \bullet character in lists
11
Automatically itemize a paragraph
12
How to make itemize/enumerate/description environment robust to missing \item elements?
4
How can I create a better pseudo-enumerated list unconstrained by any environment
2
How to use textopenbullet character for the nested itemize lists?
7
Using LaTeX while actively solving math problems?
3
LaTeX Utility/Template for Generic Reusable Code
4
A way to "execute" only latex procedural code (\def, \let) in a sequence ignoring the rest?
4
Define macro that scans ahead for super- and/or subscript, "absorbs" them and moves their argument
2
Lists in beamer taking more than one frame