How to Enhance an Existing Math Environment

I'm taking the next step in my learning of LaTeX and starting to explore the possibility of creating custom environments; however, the resources I've consulted don't mention how to create an environment like the bmatrix environment that does not have a pre-defined number of arguments.

In particular, I'd like to define a variant of bmatrix (and similar) that allows me to colour the rows / columns.

Ideally, I'd like to figure out a way to define the environment so that I can:

i.e. the desired output would be equivalent to:

I realize this is a very specific end-result, but I'm generally curious to know where to begin to be able to define this type of environment, where the number of inputs / arguments isn't predefined?

Very fragile mixture of array, collcell, and some internal macros. 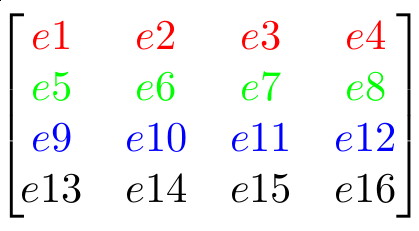 Not the answer you're looking for? Browse other questions tagged math-mode environments matrices or ask your own question.

16
Use column-separator & (ampersand) inside \newenvironment
1
Environment with customizable number of table columns
10
Which math environment use to make a table layout?
14
Long dashes for denoting omitted columns of a matrix
6
How to use newenvironment inside a table?
4
Compile error with redefined bmatrix and align environment
6
How to color a portion of a row in bmatrix
1
Create custom tabular environment
3
Creating command based in array with horizontal and vertical lines